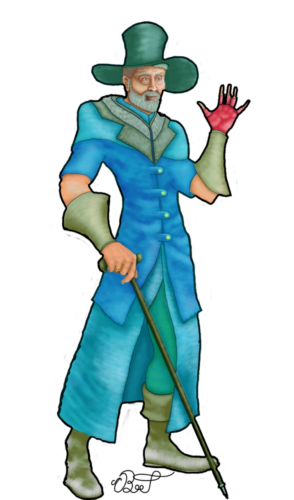 “Despite the weight of morale regret burdening his mind, he rose to become of the most powerful in all The Realm.”

Crimson hand, a nickname the lad born in Shoak acquired over many years and due several reasons, all boiling down to one thing… determination. Determination to not be treated like his parents; a tailor-couple barely handling expenses, often being bullied for protection fees from the underworld or by wealthy people avoiding payment due obscure claims and legal manoeuvres. This resulted in 4 kids growing up but skin and bone, always hungry, always working to aid the family economy.

The struggle and hardness of life was what made him determined to become wealthy, and deal with liars and oath breakers as he thought issues best solved, permanently.

He once told me, that they as kids had this trick of tumbling out in front of wagons and charts, acting like they were hit and hurt. The outcome was most often a coin or some goods tossed at them, followed by yells of removal. But one day, his little sister fell out too far and was crushed beneath the heavy wheels of a cargo wagon. The aftermath was a messy blur of yelling and sorrow, but his father’s words, “You have her blood on your hand, crimson all over…”.

Those words hurt and burned, especially since he had noticed how his little brother pushed their sister harder than usual. But that evil monster gave him all the blame, and never did he forgive his brother Spadig for that, nor his raging father for the words and belt-beating to his mother’s tears. But he took the blame and waited till nightfall. Then he took his revenge and wrapped the curse as a mantle, forever making him known as Crimson hand, a bloodied fist of revenge.

I have heard that it was but a day or two after this, that his evil brother disappeared, fearing his brother. Only to surface years later, when the Black Pelvis, So-Ein Begir, and he, joined forces with the Deadly Assassins and tried to prevent the election of the 1st High King. When that failed, he disappeared again, but is rumoured he has been seen at the time of The Great Invasion.

Oh, that lad became so adept at their game; the thieves, thugs and smugglers that is. At the age of twelve he had already worked his way upwards in their rank, so his mother where no longer bullied and pressured. And at 16 not even the highborn or devious ones dared trick her from proper payment, as he had not only climbed ranks but also gained quite a lot of followers and tight friends. As he always did tasks assigned swiftly and without error, and paid dues from successful jobs, he was allowed to grow in power, after all he brought stability to their ranks.

I met him the first time by sheer accident in 1274. He was dealing with the Kinoblin owning the Junk I had smuggled myself back on. Their short stop outside Shoak, where goods where changing hands allowed me to slide silently into the water and cling to the railing of his boat when it went for harbour. When they where done unloading and only he was left on the pier I heaved myself up and approached him.

Soaking to the bone, I quickly stated my name, occupation and urgency. I’m glad I can be swift with words, else I would be dead that night. He moves like a cobra and strike faster than a scorpion, but I aroused his interest with words about Outlands and Kinoblin origins, and agenda.

When the Invasion hit he somehow was the most prepared of all the traders and it’s said that he has treasure buried and stored all over The Realm. So, no matter where he and his agents travel, they’re secured bed & blanket, and a mug & bread. And despite him spending fortunes on provisioning the High King army and paying for free passage to numerous agents of a handful organizations, I am certain he is still to be counted amongst the richest in the now rebuilding Realm.

-and yet he is still at the road -tracking the few unlucky at his list!