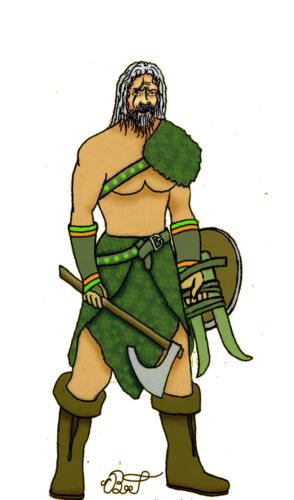 “One of the few Axedancers who grasped Baldur's Dance, making him able to face any Monster” met.

Born in Xibat, the great city at the centre of the Delta of Anurien. The youngest son of a successful portrait painter and his skilled porcelain painter wife. He saw his first sunlight in the spring of 1184 and as the youngest of 4 he had plenty of time doing what he liked. So, he spent his childhood playing with the other kids, climbing the steep aqueducts and swimming in the great Gilthant Stream.

Slowly he grew into a tall muscle lad in his neighbourhoods’ gang of young lads, playing wars with gangs from other areas. Eventually his skills in these skirmishes caught the eye of the local city watchmen, leading the local sergeant offer him a job as arms boy for the city watch. A job filled with excellence and within a few years he became one of the junior watchmen. And slowly, due to what he saw and experienced, he began to change.

In 1197 it’s said that he on a night watch encountered a odd creature at one the piers. just as he passed the stairs leading down his eye caught it climbing from the water, and he ran down the stairs with a large alarm. Reaching the creature, according to other watchmen, almost 1.5 to 2 meters taller than the lad. He faced it showing no fear and swung his short sword at its skin delivering little bu no harm. None the less the creature jumped back into the water and dived out of sight.

That night he had long talks with the sergeant and their captain, and it was there and then he decided that sticks and knives was pretty, but one had to deliver far heavier blows if one was to handle real threats. So, the next day he walked the town and consulted several weaponsmiths and trainers. Then he decided that his weapon of excellence should be double sided great axe and great war hammer. He bought one of each and the next day he started training those when not on duty.

In 1202 after actually slaying a handful of local creatures and monsters, he decided to quit the city watch and travel to Midgard to visit and train with the best he could find. Meeting trainers and quickly outdo them he soon learned of a Horde out east called Ye Olde Zaphirs. They were rumoured to have some of the best axe fighters in the whole world. So, he set his traveling and training to take him in their direction and in 1205 he stood at their gates, and as the guardsmen blocked his entrance, he yelled at the officer at the palisades to let him in or bring their trainer.

The next day he sat at the Rotten Rowboat gulping ale and chewing leg ‘o’ meats with newfound friends.

Myth became a strong warrior and Jarl of Ye Olde Zaphirs and joined them in many a fight over the years. At the time of The Great Invasion he still resided in their old village and serviced the initial attack on it. Later he stood once again beside his former friends when the High King fought back the invaders and now he walks the roads of The Realm beating down any invader or traitor he meets.