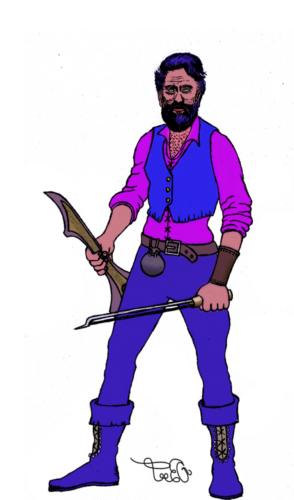 “Without doubt the mos tskilled of the current Skjalds alive.”

Ulrich is the wisest and does, like Valgrif, tend to be so short worded that the essence stands out. Yet he does add a certain warmth to it, due his emphatic phrasing and hints of joy in between lines. Only Ulrich’s long friendship and deep talks with Wrekazi, Deepminded, Kanziganthir, Zizu and Black Oak keep him ahead of Valgrif.

Ulrich was born at Bear Island, south of Bowei, and told me he could see the misty clouded silhouette of The Rim every time he went outside the family’s damp shack seldom to play, but mostly to either herd the sheep or join the egg collecting at the cliff sides. Being lowered down on a thin rope, with only the egg basket as the companion, was something that hardened every child. I do recall the feeling from dangling at a mountain climber rope, so I knew what he meant.  It was something that shaped his future ignorance of dangers as well. Thus, is he one of the Skjalds who has recorded the most 1st hand events -all he lacks to trump me in excitement, is a trip to Outlands. He though personally did lead a small band of guerrillas in warfare against the Kinoblins occupying island of Piecao in a two-year time-span, up to the High Kings victory, where they boldly routed the hastily departing Kinoblins who rushed for their Junks.

At the great Horde gathering, held by king Zizu in 1155 at Ashenhall. Ulrich was one of the hirdsmen coming along with the kings of Dalip and to his luck he was asked to confirm something by one of the kings, knowing he was wise in matters of more than melee. As he started to recite known Dalip lore and previous rulings at their gatherings to answer the question. More asked for elaborations and double-proof, at which he gave brief precise answers. To the joy of some and slight dismay of others as is always with state matters.

Later that day he was approached by the Skjalds asking if he would care to become one of the circles. Of course he had to pass their testing, but they had a good feeling about his abilities. He accepted and later that year, at their own gathering, he performed and entered their ranks.

As times goes by, and with the loss of Skjald comrades like Red Hans, Scratchy Knut, Knud the Bald and more, the weight of time and mortality has begun to show in the eyes of the merry fiddler. And I’m beginning to wonder when he will retire to The Deep Inn or a similar place.