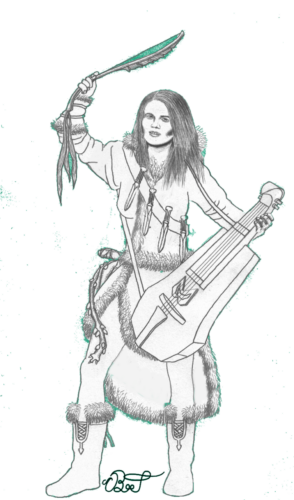 “The greatest Musician who has ever entered the Skjalds”

Born by a Tatongol mother in a wagon at the vast fields of grassy hills in western Sarova , her first days resting with the family at the entrance to Sarowall Pass. The childhood was spent listening to the drivers whistling and singing old folklore as they drove around, and as her father was a Realmar who had joined their tribe, they spent much time going over the tunes and lyrics.

As she grew in age so did her interest in their folklore and she took up singing and playing flute, drum and fiddle. Over the years she turned more to their mood-humming style accompanied by the strings. Which she excelled at to such an extent, that at their annual grand gathering in 1225, she moved commoner, nobility and their oldest Bratsch player, El Uhmdorr to such extent. That she was made court tale-singer and El Uhmdoor gave her his instrument, which she still use.

It’s said she once was a court musician showing great talent for learning even the hardest of accords and longest of texts. And that the interest of the lyrics was what made her choose the Skjalds above Bards . Her impressive talent have since showed this was a great gain for us, as she is one of the most adapt students I have taught. And her age ensure that a bridge lay strong across the gap of age we face after The Great Invasion.

El Mary is the currently highest ranked female since Citrine left the Skjalds due Yell'a'Beards inclusion and swift elevation. Youngest of the top 8 Skjalds, she is despite her youth skilled as few and it stands above her age. Though, she has much to learn, she is doing this really fast. Some say she’s even more adapt at learning than Valgrif. She has though not yet found her own unique telling style, but is currently somewhere inbetween Ulrich and Valgrif -but at times jestingly do as Kazumix or Yell’a’Beard. Shes not that fond of the heated debates Sejrik arises, even though he does agree in the importance of correctness.

I remember one time, at one of our meetings. When I brougt up some information about Allele Diploid. And things got quite heated as several major Skjalds and numerous lesser ones poured quotes and gossip so fast that all was pure mayhem. Yet, after several hours of heated debate, she ‘took the staff’, as we say. An expression for when a Skjald is allowed silence to stand and recite an event. And as she stood there, reciting an extracted, parsed, and cleaned chronological string of events and facts regarding Allele Diploid, everyone realized her potential. Not a single word or syllable could be contradicted, by even the most ill willed or debate hungry meddler.

And eventually the issue brought up by me, was cleared and could be finalized.

She participated in the Cleansing Crusade but did not take the Cleansing Oath and has withdrawn from the public. Although, she is at times seen traveling the dusty roads, seemingly in a hurry to catch someone.