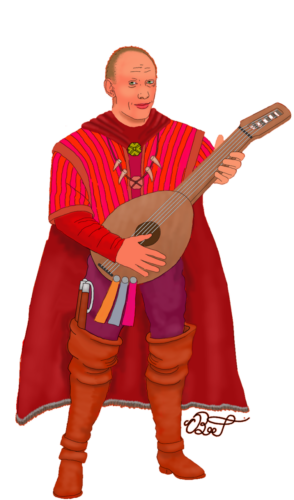 “Subtle singing and subtile hinting of doom to come, he can Weave like none else.”

Born at the northern isle of Mealis, in the town of Vinola. A beautiful old looking town with cobblestone streets, at the shores of the Burfal Tributary just where the Kompaur Valley is widest. The son of a Carpenter he learned the craft and trade of woodworkers from an early age. And as his skills grew so did the quality of his works and complexity as he found great challenges doing inlaid.

The hunt for ever more precious and special inlaid made him hike further and further, even uphill into the rough-lands of both Mealis and Thang and eventually into Pearlin and Osmes. And, as he told me, of all the places in Mealis he loved Ivory Vale the most. Both for its beauty and for the variety of inlaid to achieve at the Gem Fair.

Around his 12th birthday as he was in Passina at the shore of Bay of Burfal he noticed a large noise arise from the harbor. Rushing there he saw a gargantuan vessel anchored up out in the bay, and a smaller boat coming towards the docks. He ran back to their booth, told his elder sisters that there was trade to be made at the docks. They ignored him but he grabbed what was his and ran to the crowd… -and stopped up, slack-mouthed he stared right at some Kinoblin setting up a booth meanwhile some other was talking with the town guard captain.

That day he bartered himself to some rare and unique items in exchange for his inlay items and other exquisite materials he salvaged at odd places around the island. Such was his bartering and curiosity that at evening, when they packed their boot and was to sail out to their vessel. He tagged along and out at the ship he saw many new and weird things and at one point he noticed a cracked lute laying in a stack of ropes. Asking about it, a seemingly old Kinoblin said it was his. But sadly another of their crew didn’t like his song, so it cracked in the disagreement. Unable to repair it, despite the cost he paid, it was but rubble. Vinotis looked at it, then at the Kinoblin and back at it… then heard the words, “It’s yours if you like lad“.

Smiling he jumped at it, grabbed it and then found some rare Serandite nuggets in his pocket and offered them as payment. The Kinoblin examined the nuggets, then kept one and gave the rest back. “It’s a mighty price you offer for so little lad, let me honour thy offer with but this one. Purest I’ve ever seen… and in return for it and the gesture, take this amulet.” And he pulled off his octagonal amulet and gave it to Vinotis.

The next morning they rowed back and traded more with the now flocking countryside folks. And meanwhile Vinotis guarded their family booth he examined the lute more thoroughly. It was odd, but he was certain it was human made. A fact he got confirmed many years later, as I could easily recognize my fathers work in the hands of the performing apprentice at our gathering. And when I heard how he acquired it I must say the boldness struck me.

Since then he practiced with that lute way more than he crafted and within a few years he was quite good at it. To accompany his tunes he began to learn folk lore songs, then meeting tales for the noble and finally he dived into the events behind the lyrics. He still crafted things though it was mostly jewelry and inlay materials, he did no longer make larger things as his focus was on performing and entertaining.

All his hiking and mountain crawling had made him a rather strong man and one day at a feast in Karoly where he were celebrating his 30th birthday he involved himself in some arm wrestling, one of the men was Skrewball and the other was Bergon. He bested them both in either arm and won quite a lot of ale and silver, and the hour became late. So, it was with a heavy pocket and wobbly legs he left for his rented room. But, at a corner he was assaulted by an odd humanoid creature, stocky to bloated and with two huge fangs from its fleshy face, it was like a walrus but it had legs and arms.

As it attacked he evaded, like his teacher, F.F. Jaeger in martial arts had taught him in the academy up in Falbur and as it missed him in its raged charge he grabbed one of the large tusks and yanked hard. His forceful yank, the weight and momentum of the foe made the tusk snap with a large crack and it howled in pain as it turned. Just to see the tusk, tip first, being smashed into its left eye where it sank deep into whatever brain it had. And it collapsed in a moaning sigh.

Looking at the corpse, and the protruding tusk, he stepped on the face and broke off the other tusk as well. Then pulled the first from the eye and spat on the corpse.

I had just met Bergon on the streets when we heard the noise, it was melee for sure, so we rushed the streets and as we cornered a house. We saw Vinotis with two large tusks in his hand, while spitting at a fat corpse on the ground. Running up we asked what happened and after we had studied the corpse, Bergon said he would take care of the corpse and I should follow Vinotis home. As I looked at the tusks, he said, “These came handy and I plan to use them”.

I don’t know what happened to the Whalruz but when I met Vinotis a year later. I noticed he had an odd weapon, a Nunchako, made of something quite familiar. He saw my stare, and grinned while he nodded a ‘yes’.

He spent the next 7 years travelling the isles learning every tale he could and one day while he performed, someone stepped out into the circle and claimed his tale was thus flawed that he had to speak. As Vinotis became quite upset being interrupted he slide his hand to the weapon and svung it with speed at the forehead at the intruder. The large smack was followed by utter silence from the crowd and as he withdrew his weapon… the stranger snapped it right out of his hands. “Please excuse me, I’m Ulrich, 1st of Skjalds, and I need to correct you on that topic. And, this toy, you can have back when you can tell proper and behave.”

Utter silence, then Vinotis, and then the crowd laughed. “My apologies, good Skjald.” That was the first time they met, and the following year Vinotis was tested as Skjald and passed.

After he was accepted he spent 2 years at our own library and as the century passed into a new one he traveled to other libraries. He spent 15 years studying books and scrolls, then another 15 journeying from court to court. When he finally went to the Free City of Muldum he met F.F. Jaeger and puzzled about the name he asked his ancestry. It was odd to meet the grandchild of his old teacher and they talked much about martial arts as well as Crafting lore. At some point during their talk F.F. Jaeger noticed the Amulet Vinotis had and asked the material. Vinotis dident know and told about it being a gift from a Kinoblin.

Impressed and puzzled F.F. Jaeger told Vinotis about a place called Mt. Vula and that he could invite him there. Intrigued Vinotis agreed. The next day they traveled to a remote place i the hills to some crumbling ruined pillars. Oddly enough, as they approached, it was as if the pillars began to glow and the tiles to hum. F.F. Jaeger smiled broader than ever before, and said his suspicions was right. He had heard about them, but never seen one, and this had to be a Magic Shard.

Under his guidance Vinotis used the amulet and indeed it activated the Teleport Site and they entered the Astral. Vinotis had never been there before and was quite stunned, especially as he felt he could hear F.F. Jaegers voice inside his head, almost as sharing thoughts. As they strolled down odd paths and weird bends things shifted and he had a feeling they moved far longer than with normal pace.

They said that a hand came forth…

A voice demanding a Key…

And then Mt. Vula…

Smacking that monster in the had and in its kisser had vague effect on it, and they agreed that it was lucky they came out before that fight had any length. As they talked, some teeth from the creature, fell from their clothing. As the mouth smack had been Vinotis, he got the spoils. Those are now dangling from his necklace.

Vinotis stayed at Mt. Vula for 15 years as he was far more skilled in Crafting than most would have believed. Some, like Lord Nam and Skrewball, told me that he even worked with some Kobold and Drakk Alfar. Them teaching him, he letting them study his amulet, which resulted in the extracting the name of it, Eye of Mumra, and it was indeed a Magic Shard to all Teleport Sites. Due his explanations of activation and travel, they suspected it was able to enter through any Teleport Site in the world in one go -even Mt. Vula. So F.F. Jaeger had been right.

But when he heard rumours of something brewing at Midgard he went back. And its said he became involved in the presentation of Black Oak as the 1st High King of a united Realm.

I dident see him at the coronation though. But I know he resided at Grimsborg when The Great Invasion came.

Vinotis is one of the wisest amongst the Skjalds regarding Toponymy.