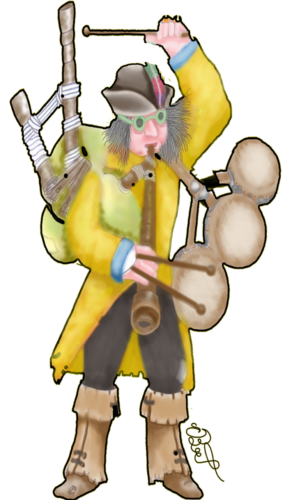 “Such cacophonic and rasping voice, always in its staccato hacking everything into his own insane verses. Often accompanied by that horribly smelling swan-headed pig-bagpipes squeaking. Does for sure hurt the ears, yet there is and has never been anything to blame his correctness for -hes a pure genious in his mad riming.”

Kazumix was born the year 1205, in Jabos at the Isle of Naldar, son of a fisherman and a mother who died in child-bed. At the age of 4 he was orphaned when his father drowned in a storm. He was adopted by a neighbor family who ran a sushi establishment at the harbor boardwalk. Mostly left to himself while the foster parents worked, he grew an interest in reading and martial arts. And at a young age he outshone most other kids in knowledge, whit, and physique.

Often, he went into the outskirts of the dense jungles, full of poisonous animals and dangerous creatures, suddenly striking from behind a leaf or surging out from the dense vegetation. Thus, he learned to be aware and is extremely agile and skilled with short blades, stiletto, and darts. From the unwary of his talents, he’s aiming skills has as often as his sagas, won him a meal or mug -when besting others at a game of darts.

His agility was actually what brought him into the ranks of the noble born. As he slightly built his reputation as a good darts-player, some noble born started to bet on his games. It wasn’t long until he played games planned by the upper circles of Naldar, where he noticed that during games played, disagreements over the course of past events often was the reason behind feuds and even small wars.

Thus, he started to memorize what was being said, and was exceptionally good at it. And it wasn’t long before he could side with the correct ones, and argue facts to such an extent that debates quickly ended. Thus, his status as fact-teller soon surpassed his abilities as darts-man, and the nobility began inquiring him about matters of state. A job he did so well that the Skjalds one day secretly attended and overheard one of his sessions. I’m unaware about their conclusions that day, but he was later voted in.

As his martial skills grew he became involved in school tourneys, and it was on such a tourney he met Mariko. And they started to grow feelings for each other. Little did he know that she was eyed by a nobleman’s son, in fact neither did she. But alas, such are the burden of lowborn. So as their feelings grew, so did the nobleman’s anger and their danger. Slowly it became clear to them that tensions and danger where growing. Finally, at a tournament about the championships of all Naldar, while he was in the ring. His foster parents were slaughtered, their establishment torched, and his beloved raped and killed. With no proof of who was behind the deed, he could not raise formal charges. But several people described the villains and with the proof at hand he avenged the dead. A deed which outlawed him in the province.

Somehow this great disaster also became his luck, as it was this event which launched his aimless travel around the Isles, making him meet Citrine in 1226. Who saw the Skjald potential behind the clouds wrapping him in darkness. Slowly she dragged him back into the light of the caring, and after a dozen years where they traveled together. Him often surprising her with his analytical ability and extreme holistic capacity. In 1238 at a trip to Findon, they finally parted ways as Citrine was certain he was ready to walk alone. So, she ensured he was tested, and he entered their ranks. Now, ready to find his own area and style of telling he embraced the world again.

It’s said he stayed at the Academy of Ri for 12 years reading everything he could get his hands on. And in 1250 he left only due to a wish to attend the high king’s coronation.

He once told me, in his own odd way. That he saw the rising High King a factor, maybe able to somehow aid him a pardon in his beloved homeland. And that was the only reason he traveled to Grimsborg, to mingle with the highest born once again. A trip he later discovered he could have saved, but don’t ask me, haven’t got a clue what the rambler meant…

The High Kings coronation was something special, an event all the kings and lords attending never would forget. Not even the victory at the Battle of Weeping Plains came close, as it stood in the shadow of all the lost. And so many more, unbroken trees, stood shoulder to shoulder when that crown was laid to rest. And so many arms were weaving that even the mightiest had blinking eyes and red chins. Late in the evening Kazumix managed to slide into the performers crowd and there -in front of hundreds of mighty lords of several races he recited tales of old in his own style –with such skill that some claim they saw Citrine shed a tear. Later that week he was invited to perform for the new High King” and the Counsel of Colours.

I’ve never been able to figure out if they were lovers, but it wouldn’t surprise me if that sneaky tongue did conquer her. Well excuse my Vularian, but I’ve never been that fond of him, and I’m still unsure if he is an agent of one of the other organizations. Maybe it’s just me or maybe it’s just the fact that his so skilled turning whatever into deadly weapons. I especially remember a performance he did at The Beastmaster fair in Grebi a handful years prior The Great Invasion. Mid-reciting a heroic tale of ancient Naldarian and Midgard business, trying to end the century long pillaging both had done. He was just about to tell about the blow that felled Xic, when two large Gaslug barbarians jumped the scene –one swung his mallet yelling “like this…” meanwhile the other grinned maliciously.

Outrageous disturbing a Skjald like that, and never have I seen one lean that much backwards without losing his balance. As the mallet passed by he caught the wrist and used the force to pull him back up. He kept the momentum and spun all around the swinger to face the grinning comrade. Who’s smile vanished as every tooth splintered when the dying comrade’s mallet hit his bewildered face. In a rain of teeth, he toppled back staring as his now dead comrade falling forward with a drumstick in his left eye and another one in his right ear –both deep into the brain. Kazumix then grabbed his hands, jumped up and kicked him with both legs hard in the chest. This move rocketed the barbarian backwards, dying from the system shock of losing both arms. Kazumix landed back on his feet, stepped forward and laid the arms across the dead man yelling to the crowd, “yes… like this… but at least ‘you two’ gets a burial…”. And then he bowed and went inside a food tent.

Later when I talked with the tent-owner, he mentioned that he’s certain Kazumix was crying while eating. I’ve never seen a move like that, until I came to Outlands. Where the Frograi assassins displayed similar agile strength. Hence my worries…

I recall being in Esly in 1273… trying to drill into several Thieves guilds… to figure out something for the High King… about the smuggling of Combat Herbs… I had my agent waiting for the guide, but he never came… and I lost track of him for years… tracks died out… I undertook other tasks and walked different paths… and then one day visiting a tribe at the Spire of Utari… I heard the suspect was at the High Kings court… I quickly packed…

Kazumix is undoubtedly the weirdest Skjald that ever was, always telling in short staccato sentences with an oral hardness to it. Like the metallic utterings of noble born  Naldar army commanders, yet with an odd prolonged rhythmic pulsing -almost like a heart beating. He is very cryptic in his wordings, yet none have caught his odd twists and tweaks being unjust to the sagas. This makes his tales extremely entertaining or dreadful -depending on the listener. It is also what has made him climb ranks to 4th, a place he might have held even without The Great Invasion thinning our ranks.

It’s said that during his wanderings he still practice his martial arts and a few have told me he even teaches some elected few his styles. They were unable to give names, locations and other useful information so it might just be loose rumours. Especially since he is always travelling all across the Realm, far more than any other Skjald. A habit he’s grown even stronger into since he in 1276 at the High Kings court heard Yell'a'Beard warn against The Great Invasion to come. He is one of the few who actually took the warnings seriously as some things fit into the pattern his own discoveries had unveiled.

After the presentation of Yell’a’Beards info for the High King, there was a Skjald meeting where Yell’a’Beard was suggested and voted into our ranks. It sent never before seen shockwaves through our society, as Citrine opposed a nomination  based solely upon foreign information rather than the traditional oral reciting of ancestral lore of The Realm. The debate ended with, some claimed, a politically based nomination resulting in Citrine stepping out of our ranks. She left the castle the next day alongside a chattering Kazumix.

I mourn the Skjalds loss, but praise she survived The Great Invasion and still walks the paths of The Realm, as shes still a vast well of knowledge.

We walked Midgard for a while… Citrine and I, discussing many things… then mayhem came… and we decided to part as we had different paths to thread… family trees died… villages and towns aflame… the roads dangerous and almost always gates to hell… Invaders roamed every street, shelter and cave… and people fled… yet in all this turmoil it suddenly became easier to gather info… and I discovered the truth about some very noble lords…

But alas, what’s the point now… the world we knew died and we need some of these mighty banners… to weave steadily, inspire –and pay back…

Kazumix told me recently that during the Cleansing Crusade he revisited his father in The Deep Blue. Where he drank the secret and sacred  'Ancient Draugr Salute' which is not for weak minded mortals to swallow.