“The largest of Elks ever to have walked the World.” 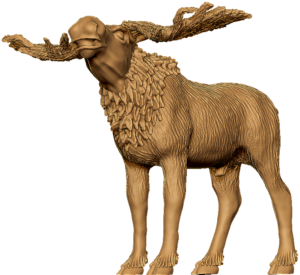 Excavated skeletons have shown that they date back to the times when only Archaic humanoids inhabited the World. Stories about them being mounts for great Heroes dates all the way back to the misty dawn of time.

Through time they seemingly became extinct throught the World but at Ljostari and in secured wood- and scrublands inhabited by Archaic and Moss'ari.

They live in herds ruled by a single male, normally at openland woods and scrubby roughlands.

They stand at a gigantish 2,1 meter at the shoulders, with massive antlers. In fact they are so large, that not even Murf'ar can stand beside one and look across its shoulders. Only T'Aurs can do that.

They are at time used as mounts by the Archaic and Moss’ari.