“Its said Gods sired the Wanderers, making the Boriac envious of the result. So they took interest in the Archaic Neander, with whom they created their own children; the Moss’Ari.” 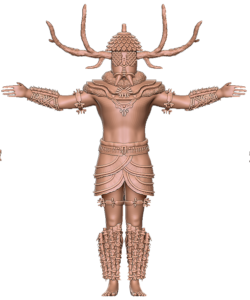 Considered the oldest of the Indigenous tribes, they are offspring from the Boriac. Whom with the blessing of Ühmrar Zänziliibûhr began to interbreed with the Archaic Neander at the Isle of West Fjella.

They have only deviated slightly from the myth and rites of their ancestral Races. To be considered pure Moss’ari, one must have heritage lines to each original race. If at any point some other race has given seed, one are considered but a mixed Moss’ari. They have inherited the hunger for knowledge and learning from the Archaic Neander, but the privacy and remoteness of the Boriac has the upper hand. They have secluded settlements all over The Realm.

All pay alligeance to one great leader, but each tribe has it’s own local daily leader. The current ‘Great One’ is Hûar Harkwald

They are a folk living in pact with nature, Spirits and the flow of Mana. They are a forest and swamp folk, one of the most, if not the people mostly in contact with nature and Fylgia. The live in small secluded societies where the leader generally is a Druid or Shaman.

They generally live in nudity or wear very little clothing, but wear a large amount of neclaces, armbands, earrings, fingerrings, etc., and leaves, flowers, vines, flowers, feathers, teeth, beads are used for decoration. They don’t like to use footgear as it removes them from their contact with nature, a nature they dislike being destroyed or tampered with, so they defend it quite ferociously. It’s told that in their youth as a Race they continued the Neander habit of tearing down teleport sites erected by their ancestoral brethren, the Heidel. Resulting in a war among the two Archaic sub-tribes.

Kanziganthir told me, some Moss’ari elders claim the Boriac told them to cease destroying the sites as they where vital to them. Thus the war and tearing down ended.

Since The Wanderers came and Ljostari sank beneath the sea, the Moss’ari have retracted deeper into the dense forests and remote mountain valleys spread out across The Realm and at Darin. 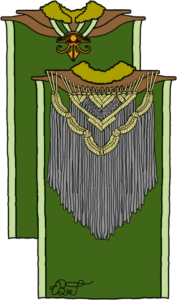 But when they go outside their settlements, for example travel to gatherings or surge out to defend theirs. They wear great capes of wool , with wooden shoulders and elaborate knitting unique for each genus. I suspect that the patterns have a deeper meaning, but no Moss’ari have explained it in depth yet.

It seems to me though, from what I have managed to hear and observe, that the visibility of the genus member in front of other Moss’ari somehow gains community fame. Thus inspiring others to act more feriously towards the enemy.

They are surely a sight when they go to war, often body painted to look like Birch bark, enhancing their shoulder width and wearing great nut shaped helmets with odd large bulging and betted eyes and mouths. Normally they are nude or very lightly armoured. Some melee units occasionally wear greaves and bracers of thick bark and Ironthorn branches.

Their armies or warbands are seldomly led by the tribes leader, but most often by non Magic using warlords. Skilled in the art of warfare, having an occasional Mana Manipulator or two tagging along. The only metal they use are the rare Ljosti Bronze as fittings for the Magic Glass tips, blades and spikes, to their richly engraved Ironthorn weapon shafts.

One thing one also may notice is that military ranks are displayed by the amount of separate edges on the skirt.

When they go into war its mostly on foot, but at times they are seen mounted on Ljostari Elk or Unicorn. 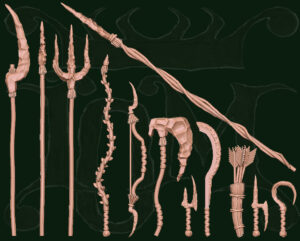 Their weapons are generally made of the exceptionally strong Ironthorn, fitted with Magic Glass, they use a varity of weapon types but generally goes for slicing or puncturing weapons, delivering wounds that allow the often applied Poisons to take hold and spread in their opponents.

The Magic Glass also seems to have an Mana Flow freezing effect disabling a Mana Manipulator from using his Magic Paths properly. 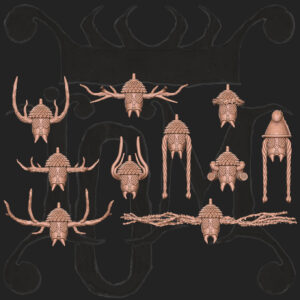 Aside their weapons, skirts and capes, they use helmets carved from huge Ironthorn seeds, shaped somewhat in the image of Wasp or Ant. With all kind of antlers, Ironthorn branches, horns, ropes and more attached to add to the odd looks and distinguish Unit type..

These masks are also sheltering them from Mentalism attacks.