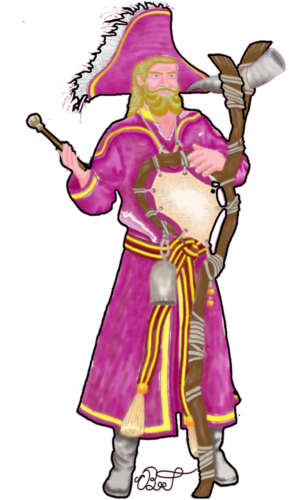 “A smuggler rascal, who took the long road forth and back to Outlands”

Yell’a’Beard was born in Apal, more precisely in the foothills of the mountain range toward Esly. Born the youngest of five siblings to a Skinner family, he quickly learned Tracking Skills and how to keep spirits up at campfires. Dancing and entertaining the other Rangers, Hunters and Skinners, soon became his mark. And at times brought him at the edge, of what others would try or endure. At one such early trip for skins, their small band was surprised and attacked by a large pack of hungry Wolves and he was separated from the rest, and for years thought dead.

The ensuring fight in 1187 separated me from the rest of the group and forced me to run like never before… for a distance far longer than anyone ever did. After a full day of fleeing I realized I was far off normal tracks and oddly enough it was as if the mountain rim was in the wrong direction.

The next day I saw a lodge, smoke emerging from the chimney and I went up and knocked on the door. Being welcomed by a hermit, who was surprised about my dialect and claim of origin and passage, I was fed and thawed up, slowly realizing I was in Esly. And thus, had discovered a previously unknown passage in the mountains… I might tell you where, but man I’m thirsty…

For the next 12 years or so it’s said Yell’a’Beard travelled across the mountains many a time, often with cloaked companions or wrapped up cargo. This is, however, not verified by him or others, but my knowledge of his appearances in cities and roads in Apal and Esly hint at this being a fact. One thing that is certain, is that he has a great many friends amongst the commoner, the poor, and the shady parts of society. Some even told me that he’s seen with both Setil and Den Godan on several occasions. Both at taverns and out on road. So, it’s no wonder he became so well versed in the matters of the world.

It’s said that in 1271 he broke a contract of passage… and when the customer finally tired of waiting at the docks of Gilgamil, he took the long sail around Claun. I did not witness this, but some say that a Kinoblin Junk passed Esly that same day. And, that was the beginning of the 3 year long absence of Yell’a’Beard.

I was out at the bay delivering a package to them secret bastard Kinoblin, in our small roofed boat block prying eyes. Handing off the goods and turning the boat, I had this sudden urge. Either I could go through life, zig-zagging them mountains and the High Kings prying eyes, or as one of the boldest champions ever. So, I edged over to the far side of the boat, slid silently over the railing and dived back towards the junk. The longest diving anyone ever made I tell you… far longer than any of my previous records in the basins of Gilgamil. And with the last breath of air in my belly, I emerged hidden in one of the huge floating anchors beside the junk.

Come night when we passed the strait between West Fjella and Midgard, I climbed one of the ropes and entered the ships main hull. And my god, the wisdom I gained hiding in the cargo for all them months, and what did I not learn at their lands… but, by my beard, I’m getting thirsty again.

What actually passed, during the 3 years of his total absence from any scene in the Realm, is uncertain. Regardless, I’ve heard the highborn gossip about his tales being as good as any fact, and often discussed at court and counsels. Some even say he is one of the most consulted regarding ‘Outlands’, as we call them. But as he seemingly has told the High King, the Kinoblin themselves call their realm up north The Misty Isles and a continent going all the way to The Rim for Lizard Lands. Much of the planning in the coming crusade is said to be based solely upon his treasured information.

Its certain… Yell’a’Beard sailed on one of those gigantic Kinoblin treasure Junks, Gems and Gold as bunk… listening to the snouted big-eyed hunch backers babbling in their odd tongue… for night after night, week after week, and month after – hold my breath sailor!

He’s told me of Humans in their lands as well, and thus why his cover went so well… he learned their words, minds and when he finally understood their great plan… he dropped every gem and bar and to the shore he went… and stared at the immerse span… separating his beloved from his knowledge… and his friends from our foes!

Risking it all again, he dived, climbed and slid… and under a pile he hid… this time much sharper at their words and with passage on a far superior junk… he had chosen a way better bunk… seemingly listening to generals, leaders and top snouts!

He learned of their actual plans and after his first thoughts… to warn his friends Lionel and Setil… he decided to aim for the High King… despite knowing that new one being but a green lad… cause these news where indeed sad and bad!

I tell you, in their lands I saw some odd Monsters and nasty Races. All eager to subdue each other and not at all like here in The Realm. The founding fathers had it right, when they said peace and trade would benefit us all. But by thunder and high waves, they have some brutal warrior tribes over there. Each one able to stand toe to toe with a Mammutan, outcome uncertain I tell you. But where was I, oh yes, their lands are a whole tale in itself and I’m hungry.

But it’s no wonder to me the Grimsborg guard was defeated that easily. After all the Anurai was carefully chosen as those best fit to win with least casualties, but by the foamy spray, they didn’t count of the toughness of the eight Hordes.

oh well, better not yap like him, might bring him around and I owe him a coin or two.

Despite him talking about urgent and important information since 1174, it didn’t seem like the High King trusted him. Luckily some Nobles and Officials saw the value of this boasting half-pirate scoundrel and took note of his warning and began inquiring about him. Soon to realize he was friends with Setil, Den Godan, Lionel, Nefius and more.

In 1276 he became a Skjald at an extraordinary meeting set up by Nobility and Traders. The newfound status made him able to focus solely on gathering and organizing information and his climb through Skjalds ranks was swift and unwavering. The value of his information ensured that he currently is 2nd in our circle. And, despite that big greasy beard and boasting demeanour, he’s one I’m glad to call friend and one I honestly treasure accompanying me on my travels. But since the war is over now, I somewhat dread the next grand meeting of ours. As I expect the circle to vote in favour of Skjald Valgrif.

He know the language of Kinoblins.