Then races divine.. all alike stared down… and toppled human the crown…

Dead, destroyed, diminished they now live on a divided world.” 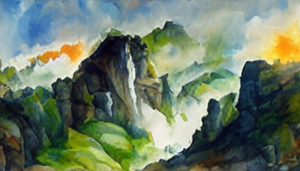 The known world has three continents, The Realm, Darin which is connected with that planet spanning mountain range we call The Rim, and Outlands. Rulers and traders of ours have through time tried to reach out to Outlands, in attempts to trade and exchange knowledge. But the various races of Outlands have halted all such attempts with hostility; killing or capturing, as I have seen, traders and envoys.

As they did travel throughout our lands prior to The Great Invasion, there was a rumor that the Kinoblin race originated from Outlands. It was based upon the fact that the sails of their trade ships were seen appearing in the horizon far west of Golny and Hokul. Asked directly, any Kinoblin denied that fact until The Great Invasion occurred. Some people didn’t even believe me, I who even has been to Outlands, when I told them that I had seen the Kinoblin empire and could guarantee they were from Outlands. Regardless, they are now a hunted foe.

The World rotates around its polar axis, with the Sun rising and setting in an arch from The Rim. Thus, the Sun sails closest and shines the most at the poles, making the northern lands, especially those at the Islands of Findon and Mealis, the hottest and driest lands on the planet.

It has seen several major transformations or resgapings if you like. When it was first touched by the Astral, in the 1st Cataclysm, when Ljostari sank and Mt. Vula erupted. Each altering its shape, behaviour and content dramitically, and I’m uncertain who of all Races has taken the hardest tweak or blow. Some of the candidates, is the Drakk Alfar as they both lost their ties with Vornir, became victims of that horrible Wickeryadi mess, and ended up at both sides in The Great Invasion.

Roughly it can be parted into Land, Air and Sea. Sea generally being called The Deep Blue and Land split into The Realm, Darin/The Rim and Outlands. We are aware that theres something South of The Rim. But not enough knowledge to tell anything specific.

Mana from the Astral… can’t exist here without crystalizing…

yet then again… tes it can…