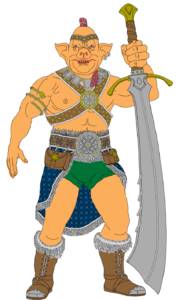 “From the loins of a Pigryn and grown to life in a Human Queen, this Half-Human became a true Hero.”

When the Pigryn invasion in 1202 SA at Pigs Bay in Noriag took place. A small yet strong contingent of Pigryn managed to breach the gates to the castle and enter the chambers of the royal family. Luckily a defending army contingent passed by and came to the rescue. Killing all invaders but one Pigryn Lord and his Sproblin thrall. Who barred the door to the Queens chamber and did horrible things to her while the invaders held defenders at bay.

The King came back amidst the fray, rushed the stairs and kicked down the door, rushed in and sliced the Pigryn’s head clean off. Stomping off with the head to show the people victory, all forgot about the whimpering Sproblin hiding in the pile of a Queens torn dress. Until it was hauled down into the dungeons to rot.

The Queen became pregnant and eventually gave birth to the Half-Human offspring. After long pledges about the infants innocence it was allowed to live. And did he live, strong to the bone, humble and proud due heritage and siring. He became leader of many a second or later born Nobles. Who ended up as sort of uncaring rascals, caring but for feasting, fooling and an ocasional dance on laws edge.

Yet, when they had the chance for glory, they grabbed it without hesitation and saved the life of Black Oak during the war between the 1st Alliance and The Torch.

Coming of age he created Swine-Bro's Gang  often roaming the lands for Monsters and in time it became a small gang of occasional followers. 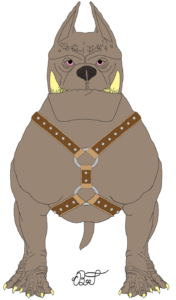 Exceptionally strong, and at times he mount the gargantuan Mastiff ‘Rock-Jaw’