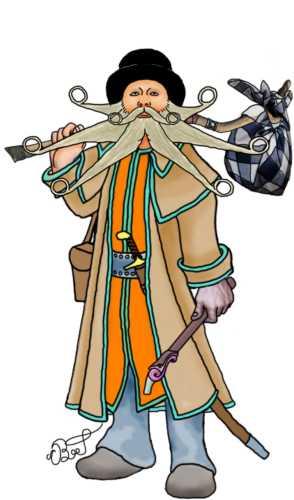 “Mind so sharp… tongue sharper… sharpest of all… grand and small…”

The youngest son of music instrument making parents, they say he always had a tune in his bones. Sometimes it chimes a tad too high, but that came early the same folks say. Anyways, with somewhat successful parents and 18 older siblings of which some already had earnings. There was so much life and things going on, that the tail of the flock had nothing to do but whatever he liked. So he played, acted, sang and composed when he didn’t study math or language or alchemy or… the lad was a bright lamp for sure.

Being born in Trambadol at the foot of The Trambadols Shelfs and the shore of Kimlops Bay he had rivers, mountains and the sea close by. So he saw trade caravans often. He told me that he found Lionel one of the more exotic and merry traders, and even sailed with him a couple of time when but a lad. One of those was the day in 1170, where Lionel was informed of something of an odd vessel that had anchored up. Lionel was silent for a minute or two, then he ordered everyone ashore and promised that if they would let him have their cargo for now, he would pay them back tenfold. Knowing it risky, he left the brought along stuff borrowed from his parents to sell and his own few instruments he also left behind. Lionels cargo assistant joined us at the shore and The Falcon was off.

The scolding when he came back made him leave the family, but the riches the goods he had trusted to Lionel ensured he could pay them back proper and live without worries. This event, being at the right place at the right time, is said to have been what birthed his fondness of visiting courts and taking chances. A life path that should take him far across the Isles, as he became a Bard by his own hard labor and went from court to court entertaining the noble ones.

But as time went, he said, he became bored of singing made up praise and old fairy tales. He much more liked the real sagas and legends. So around 1199 he began studying everything he possibly could about any court he visited and as the decades passed he became extremely well versed about the things that had occurred. Slowly he built his reputation.

At a grand royal feast in the year 1228, celebrating the 100th birthday of Junnatu Weavers great king Meanbone I saw him perform again. This time I was certain he should stop be a Bard and become a Skjald. So late that evening I asked him how he would think of such a offer he grinned, and said… “Finally someone of you asked, I’d be honoured and of course can test as soon as you like“. We had a great night and within a week we traveled to Findon, to attend that years gathering of the Skjalds.

It was a heated but fun gathering in the Dunes of Drogtor up in Andalus that year. Especially since both Ulrich and Citrine had brought apprentices to be tested. And it was a merry thing to learn, that they both had careers as Bards, but felt for joining our ranks.

Both tested out great and delivered stunning results and performed well in each their way. El Mary with rhythmic movement while presenting and Sigurd with rhythmic use of voice. Both passed, the first time a gathering had dual apprentices accepted, so of course things became rather festy. Especially for me as it was my 30th anniversary as a Skjald.

After I was accepted I spent 15 years travelling previously prohibited libraries and organizations shrouded in secrecy to study. And in 1244 I went to Kistal and stayed at The Deep Inn tended by Deepminded for 2 years. Then I again traveled the Isles visiting courts for 4 years. And slowly began to figure something was brewing in the shadows, a High King was to be born if the powers behind were successful.

So I went back to my homelands and visited Lionel, now the owner of a isle outside Golny that he had named Island of Piecao and wealthy beyond imagination. Such a splendid place he had created but how odd it was to see the Kinoblin walking around the town. But so little did we know back then.

I was greeted heartly and he even remembered me, telling me that one of the high ranking Kinoblin had liked my Instruments so much… that my parents was now the richest in Trambadol if not in all Lioni. Grinning he corrected that, the king may be richer due my gifts…

He showed me the town and the island and his house, I was impressed how far this little war victim had come. At dinner we discussed things and I asked him if he, at least I assumed he would know, could share any info about ‘a king to be born’. With a sly smile he told me of a gamble, but quite a good hand in play, they had set in motion to secure peace and trade stability. They where to propose a High King and uniting all Hordes in The Realm. In fact they had a king to present at a coming ‘meeting’ with some opposing kings this very year. I should come along. I did.

I remember him at the High Kings coronation…

Later we spent times together traveling and discussing people and fractions…

As time passed we began to notice some well hidden alliances…

And preferred company of this and that noble, lord or merchant…

Information we actually didn’t share with the circle until The Great Invasion came.

The information Sigurd and Kazumix had gathered over the years, along with the experiences survivors could share during The Great Invasion. Made it far more secure to organize and launch the Cleansing Crusade. Avoiding to notify many traitors and renegades before we where at their gates was key to the success of a motivated but worn and aged High King, and his equally fatigued fellow Heroes.

One of the most skilled Circular Breathing performers in the world and can though recite endlessly.