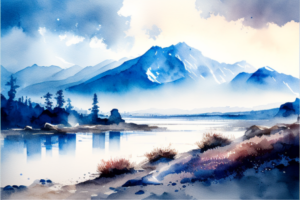 The mountain range formed all the way back when World elements began to contract in The void and have up through time been a growing divider of Northern Amrad and Southern Amrads Four pond Valley. A great valley reachable by several high mountain passes, the broad Northeastern Grobes Pass and from Mazeuri, up the Eastern arm of Loplus Tributary – fed by the four lakes.

They run from the Northeast to the Southcentral Amrad.