“Since dawn of time the T'Aurs of Kolind S’ump has lived at their Earthnode, resisting Boriac, Gods and every T’Aurs ‘Call of the Horned One’.” 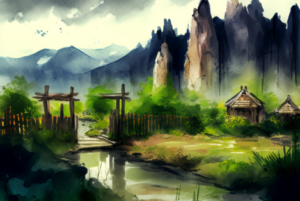 In caves… trees… holes… and huts…

These have kept to the safety of their Earthnodes ability… to keep its shape during every World Reforming… and they’re also the only T’Aurs Clan… living in treetop huts, trunk carved rooms, earth caves and woodden huts.

They are said to have been a hunting group from Mazeuri, who when found Kolind S’ump felt the pulse of something so strongly. That they diden’t even send messenger back to tell those in Mazeuri that they would never return. So it was first centuries later they again connected, when new T’Aurs passed by. And even though these also felt the pull of Kolind S’ump, their brethren living there had changed too much for their liking. So connection was kept formal.

These T’Aurs also keps everyone away from the area, if not by proximity than by force. Only one settlement of Humans has ever been allowed to be erected somewhat close -that of Berserk Masters.

The Settlement is merely fenced with palisades, trenches and natural water ponds and streams. Even though one can figure the layout size of the Kolind S’ump T’Aurs out, none but they actually know how much tunnel space there are in them hills. And as its cackside are that huge Magic Glass mine of theirs.

South of Mt. Glaore just as the steep mountainside flattens abruptly out in swampy lowlands, lies a handfull of small hills making the site rather rough for a non-cliff area -although large rocks are present.

Led by the 'Bos Ottar Zen they gererally keep to themselves, but they actually surged out and traveled to aid Black Oak once, in a rescue raid against a wanna-be Fylgia lot called Kaelterne.

They simply can’t control their rages when first gone Berserk.