Once the gate between the two world halves it became an Isle of proud personas. Eager to spend their wealth and surpass others, slowly becoming a rash and hot headed population.

Located as the south-eastern Isle of The Realm, with Agion the country reaching the farthest south. But the most interesting thing about Dalip is not that it is close to The Rim. No it’s the fact that Lionel managed to establish a free traders heaven at Island of Piecao in the 'Bay of Golny' 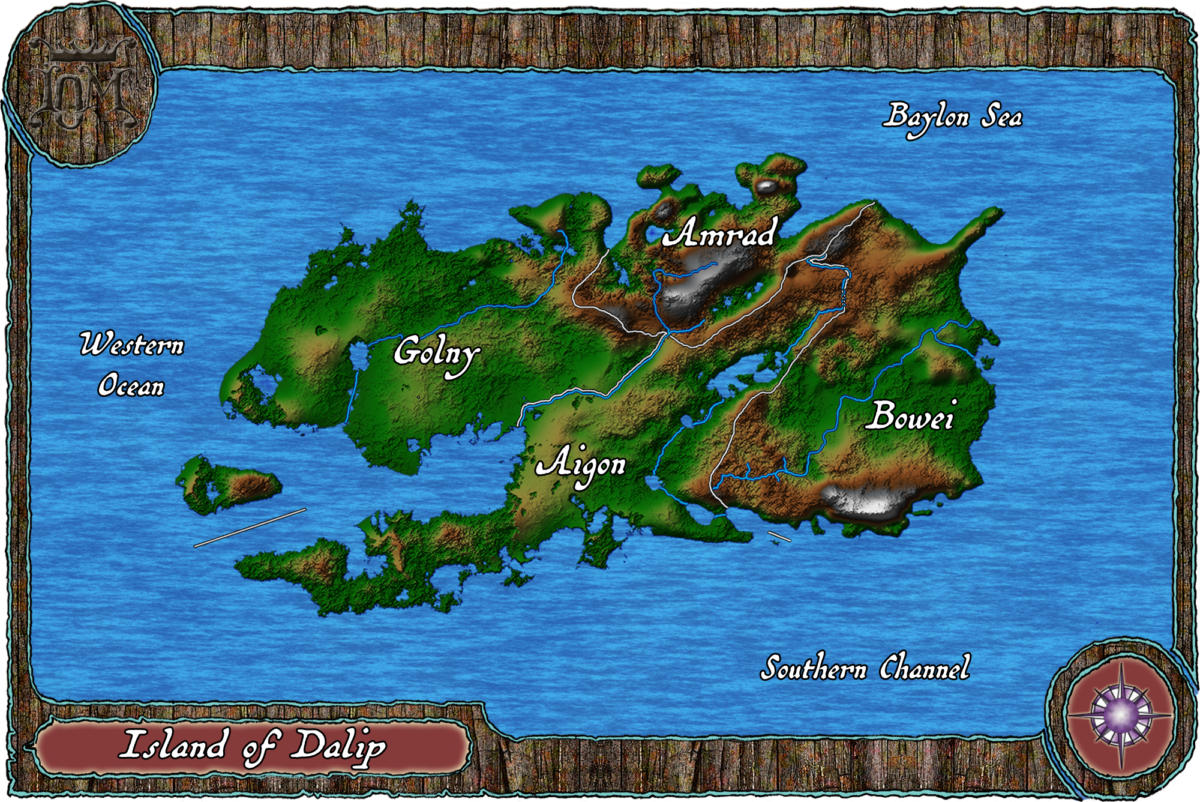 Island of Dalip are the home of four of the greatest rivers in The Realm.

At Agions most northern end, in Mt. Agvall springs forth Moltins Creek and runs undecided down, not sure to go towards Bowei or Agion. But as it reaches Muhrmanns Maze it swings westwards and cuts itself into a deeper, stronger stream, River Moltin. Rushing down Black-clay Hills and pouring out into Lopnis Valley. There it feeds the gargantuan Gilpoms Mirror, at which it continues through Bertils Ponds into the Valley of Volgimeer. The valley ends at Cirdalz Spiral, an odd natural phenomen where the water runs in circles all the way down to what is estimated the sea level outside Agions southern shore. The river ends in Cirdalz Spiral, and it’s believed it feed Lake Läkarüm east of Lerbim Heights through underground tunnels.

In Bowei, high up the southern Mt. Wyrrol, River Arbul bubbles forth and quickly gains strength as several other small streams falls along and when it reaches Copper Canyon, its quite brutal and cuts sharply through Jåls Shelf. From there, it slows down and broaden as it flows out into Kåls Plains and goes northward untill the Habberwok Wall forces it to bend towards the Sea. But the Molten Softlands where seemingly an easier path then the Raggy Mounds so it has carved it path further northward. Up in-between Mt. Trob and Mt. Grob as a deep narrow river it broadens as it reaches Potomly Plains where it splits around Mt. Milbo. One part running northwest out the sea and the other going west and spills out into Bay of Palerbo.

In Golny the great river Gülvarr is the mightiest water source, yet it has offspring in what some consider Old Amrad. At the western side of Valley Anvorr high up Mt. Negrül it bubles forth and soon break downwards as the Blackhand Falls. Pouring out into the valley it creates the Twin Eyes, two deep lakes and then runs towards Sulmans Ridge. Cutting thin and deep between  Mt. Omcap and Mt. Pimbro through Craggmor Crack.

Toppling violently downwards it runs out into Mervag Roughlands and when it hits Mervag Highlands it bends in through Oggnils Vallley. Slowly floating by Rebalds Hills. Reaching Poymel Pits it takes a sharp twist northward as Gamgur Roughlands blocks its passing and Bebbols Plateau gently offers itself as path for the continued flow.

From there it falls down the Danglemar Depts and forms Lake Pimla, from where it runs into Rebalds Hills trough underground tunnels. Finalizing a long proud journey, Güllvar creates Traruds Triple Ponds and then runs out the Bay of Runur.

In Amrad, Loplus Tributary springs from Mt. Aggnurs west side. High up the Nurr Mountains, it runs, falls, plummet, at drops violently westward untill it reaches Jokke's Highlands. There it becomes a broader, yet still deep, river zig-zagging down Ytamil Roughlands flows down below Duru and as such out into Agion through the Valley of Horrowak. Reaching the valley end it cuts southward and runs through the Wertimo Plains where its further strengthened by waters from Lake Gaxerr, making it a broad and deep strong current ploughing through the rough hills into Lake Mürr and then Lake Wöti. From which the waters take one last flow out into Folkes Bay.

It has turned back to the chaotic state before the time of Hordes and are now a place for the bold. They have no common law after The Realm crumbled and one can risk demands of protection fees from inn to roadbend and at every streetcorner.

Its still possible for excavators to find sites where the first Wanderers rested for short or long periods.