“Corba Tunnels was carved by underground water streams in the Dark Ages. At some point they dried out allowing for Archaic Tribe to pass underneath the mountains.” 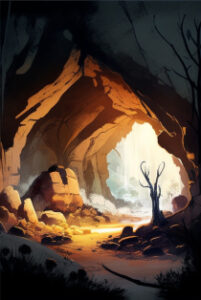 In the Dark Ages Tribes of Archaic noticed the water streams began to dry out and they ventured deeper and deeper into the tunnels. They kept exploring and some even took residence in the tunnels. So deep where their ventures that they came out on the other side of the mountains. Soon the Corba Tunnels became a preferred route to other Races who over time also began to detour and explore the tunnels themselves.

This led to visitors intruding on Archaic sites and ocasional trampling of their sacred sites, even plunder and grave robbery took place. So the Archaic marked safe public travel routes and began enforcing their centuries old camps. This led to some small conflicts but the ‘Corbans’ as the Arhgaic Tribes there where called, had the upper hand in site knowledge, numbers and short supply lines and determination. Thus the public paths became as they are now known.

At some point a large odd plague struck home and killed more than 80% of the Archaic and since no Mana Manipulator has been born amongst the Archaic Corbans. 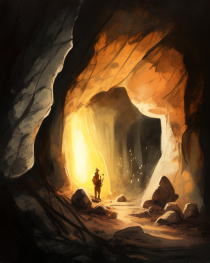 Up in the mountainside, in the Eastern  Harrums Heights lies Harrs Kettle with several entrances to the Corba Tunnels.

On the other side of the mountains are several other entrances, to the extremely vast maze of tunnels and large fungi lit caves. Where one xan se the most odd of cave paintings showing Kobold, T'Aurs and many more hunting, dancing, and doing other things.

Tunnels and caves has the oddest of Fungi.