“A long time ago a Archaic Tribe painted what is considered the first images of Kobold on these cave walls.” 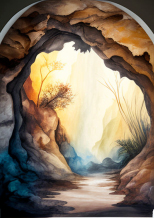 Late in the Dark Ages a Tribe of Moss'Ari on the move took shelter in these gard to eeach uphill caves in Southern Dipokaland. Resting there was only planned for the duration of the storm, forcing the Moss’Ari up from beach, but seeing the cave paintings and searching through the remains they stayed for weeks.

Centuries later at some point in the early First Age the Moss’ari descendants met with some Archaic and discussed the caves. Quite interested the Archaic was led to the caves discovered by Mibro Er Bryntesson and his flock. There several questions that had riddled for ages where explained. They then brought and discussed it further with some Kobold, Ljost Alfar and even some Wickeryadi in hope of finding out who had lived there. Not before some Drakk Alfar came by, ties to a Archaic tribe that had been consumed by the Astral when construction of a Teleport Site had gone awry.

The Drakk Alfar even call that Teleport Site for Gnu't Ar'uls Gate as they where hired by the Boriac to carve Runes and Hand Weaving illustrations on the pillars. Luckily there was only a handfull Drakk Alfar in the building camp stuffed with all that Archaic Tribe. But they gad been unaware of the Archaics home thus never been there before.

High up the foothils in Southern Dipokaland, where one normally pass by below at the sandy beach of Poka Bay lies the Mibro Caves. To get there one actually has to turn uphill before reaching the beach from either side. The path is somewhat narrow as vegitation has eaten what was once a road broad enough for both Mammoth, Ljostari Elk riders and large wagons.

Caves has the oldest… images of Kobolds….