“Story goes that the Archaic Tribes leader Lemyiq E'r Arthuz created the crevasse by holding the raising mountains back in the 1st Cataclysm.” 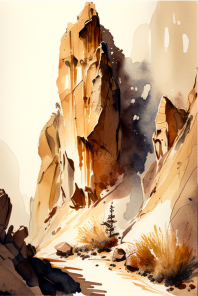 Its said that when lands reformed Lemyiq E’r Arthuz summoned all his power and with his sheer will prevented the raising mountains from destroying their milennia old home. Thus, if one studies it closely, theres what seems to be mighty palms pressed into the sides of Peak Ondvi and Mt. Ghanak. As they kept rising the crevasse was formed and the Tribe kept their home. Even though the ancient Archaic was much stronger Mana Manipulator than today. Gods must have helped if its true.

Anyways the crevasse still has a camp of Lemyiqs descendants, some of the most powerful Archaic Hand Weaving and Magic Paths users. 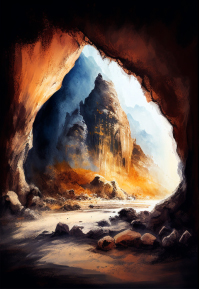 It lies in Usai from Honver Valley across the mountains into the rough highland of Lemyrippla before descending down into the Clover Lakes.

At the cliffsides in the Archaic burial place one can see ancient carvings of Kobold, Dwarf… and Wickeryadi.