“How it happened, was it a breach in the Astral or in our World. Which allowed energies to give birth to breathing, thinking, crafting Races -not even the Gods seems to know. But through countless millennia each has evolved and formed distinguished races which interbred or warred for dominance.” 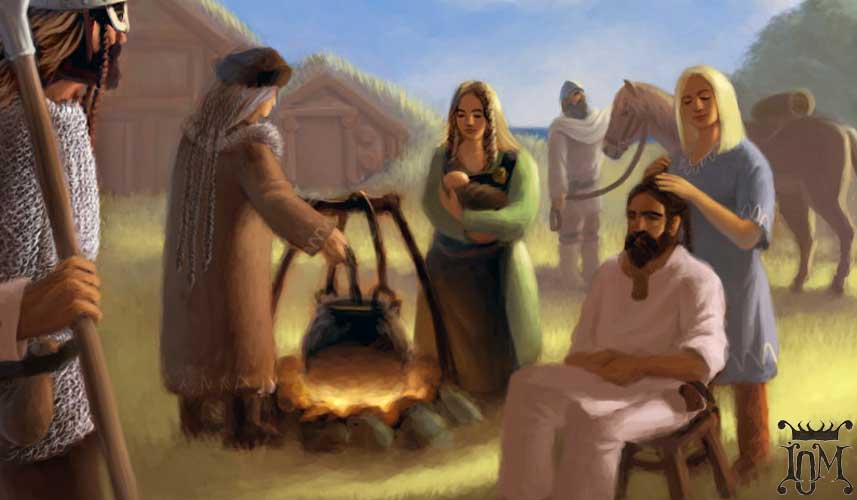 There is no doubt the Divine Races are the oldest, nor that those we call Other Races are older than Human and their Archaic ancestors. Excatly how they came to life is uncertain, but millennia old tales of Vornir discovering a Mana leak between our World and the Astral. Tells of Vornir beginning to spin those energies, giving them form and purpose. I’m not quite sure that the Vornir should be thus praised, but since Scholars have nothing to show, I guess they can have it for now.

Through intense studies of the oldest scrolls and books. As well as long talks and discussions, with some of the oldest of all living beings, even Gods, Boriac, Thursar and some Wickeryadi. We have been able to construct an birthorder of all the intelligent Races. But, as most occurred in the early Dark Ages we dont know years or spans. But we do know that whats called 1st Cataclysm came after the birth of Ljost- and Drakk Alfar and it was during this the Aquerian and Sealkin was first seen. The Old Reshape as we call the cooling down of our World, also saw the first Undines and Minotaur stepping forth.

As such a whole new Race sprang forth when Ljostari sank and The Deep Blue flooded remains of the dead, from that tsunami the Arisen sprang forth.

The Other Races and Humans are alike in so many things, but in one they are set apart. It seems, due studies of Draugr, that Human alone among races have the ability to force their Spirit to stay in our World, even though their Carcass is damaged beyond repair or they die. In which case the Spirit keeps the body animated. Aside from that races are alike in but variations of looks and the time until they die of age.

The Other Races do though have a much longer time-span in our World and where born long before any Human sub-race. Some are even half-part of current Human sub-races. Their World-time and long lasting cultures has bestowed upon them a much more relaxed and strategic approach to world-matters -unlike the more impetuous and rash shortlived mankind. Which might be the explanation to why it took them so long, to come aid Human in The Great Invasion.

Prior to The Great Invasion most Humans blissfully thought themselves sole inhabitants of The Realm and considered other races pure fiction, or occasional Monster best slain, and thus they lived happily ignorant, but those with insight knew better…

Most people froze and children shuddered when a Kobold, Kinoblin or Minotaur entered a village and even sturdy guards or traders clearly showed their discomfort when approached. While others, accustomed to dealing or working with the other races merely had a merry smile, and easily went into cozy chat or business. The Great Invasion made these factors even more visible, and common folk have begun fleeing the scene whenever any racial creature but humans show up, meanwhile those accustomed to the other races merely base their actions upon one simple question; is this of the hostile races or is it one of the friendly ones? This is a fact that has cost many a being from the other races it’s life, despite its intentions, and many a human from the renegade or traitor.

I find it odd though, that the tall dark sticks of northern Findon, and hairy muscle-mountains of southern West Fjella, despite all our diversity and sprawled looks, have that little insight and respect for the other native races. I mean, we humans do after all cover all of The Realm , leaving very little room for the others to act as they would like. But oddly enough, they seem to accept this.

They are able to keep their Spirit in the World and thus become Draugr.