“Famous for its Maskurm Falcons since dawn of time and its independency from The Realm.” 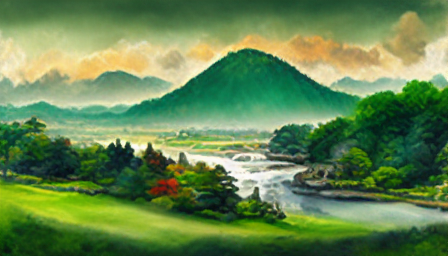 In 1132, a large portion of Revins’ population fled to Maskurm, seeking refuge. Eventually, order was restored on the mainland, and most of them returned home. However, a small group of survivors stayed behind, establishing a path across Maskurm to the Bay of Ishmir and founding small harbours North and South of the island.

Over time, these harbours grew into small villages, governed by whoever managed to seize control. The only person with any real power on Maskurm was Lionel, who was more interested in tax-free trade than anything else. But in 1170, Lionel seized the opportunity to cement his hold on the island, naming it the “Island of Piecao” in a presentation to a group of Kinoblin staring down from a Junk. This was the first step in a series of bold moves that would eventually earn him a leading position in The Realm.

At the brink of 1170, Lionel approached the King and purchased Maskurm, officially renaming it the Island of Piecao. He then began construction on a large harbour on the western side of the island, which expanded uphill into living quarters and villas. Lionel also built a grand mansion on the Mardang Ridge, so he could look down on the bustling town of New Revin to the west and out over Lake Miraf and Mt. Ishmirr to the east. 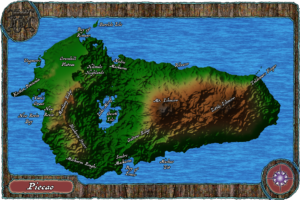 The most Northern point is the small Barelds Isle, but on the mainland of the Island of Piecao, it’s the Rimunr Peninsula that sticks furthest north, sheltering the Bay of Rimunr. South of those is the Himulo Highlands and the vast Greenhill Plateau, stretching down to New Revin and the steep-sided bay called Yuris Grave. To the west of that lies the Kostian Peninsula, and north of that is Vagmeers Isle and Bay. South of all that are the New Revin Bay, and to their East lies the [Mardang Ridge, Blackrim Stairs, and Maskurm Roughs.

Becoming tax-free and the non-sworn Governor of the Island of Piecao. Gave Lionel tremendous status and over time, he amassed wealth few could fathom. He formed his own militia, city, and personal guard to ensure his trading realm. Some said a secret corps of informers in all harbours facing his realm was also built. But we have been unable to confirm this widespread rumor

It’s a tax free traders heaven where everything can be obtained -for a price!