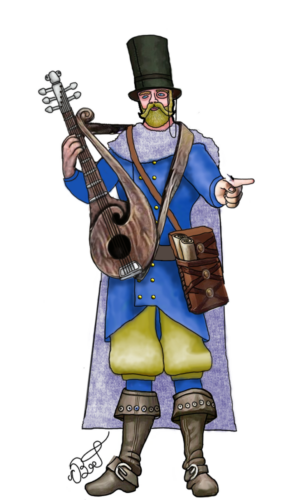 His Jomzaar mother gave birth to him in Agion at the small town of Duru, last stop before the mountain pass Laduru leading to Golny. As his father had died in an accident before he was born, he spent the first 4 years there. Then his mother found a new love and the family moved to Golny.

Valgrif is without doubt the most talented Skjald since Huginn. Despite being only half the age of Ulrich he’s close to being equally wise, and he has befriended all but Kanziganthir and Wrekazi whom he only met once. He did, however, spend way more time at the High Kings court, and thus has a different pool of close friends who are equally wise, yet in the more legal and administrative matters of The Realm. He always tries to be as factual as possible, and delivers the sagas without the alehouse warmth of Ulrich.

Valgrif is son of a shipwright and ferry master from mainland Golny to island of Piecao. As a young lad he helped transport travellers, meanwhile listening to their stories and event descriptions. And much to their surprise, he recognized and addressed them with openings about their stories, told at their last visit, at times several years ago. Eventually he ended up as sort of ‘court herald’ at Piecao. Advising Lionel about the approaching, and at times attending counsels of The Realm. There he met Zizu and was breathtaken with the century old King’s knowledge about The Realm. Thus, he left the service of Lionel and joined the court in Tornix. There he quite rapidly consumed as much information as he could, and when he eventually heard tales about Kanziganthir of Ye Olde Zaphirs, supposedly 3-4 times as old as Zizu, he decided to depart for Grindaa and join the court of Ye Olde Zaphirs.

Sadly, Kanziganthir and the former king Black Oak had both left for Grimsborg, but he decided to stay for a while and learn as much as possible in the many old libraries of this great Horde. In 1262, when he finally decided he had learned enough, he attended a High Kings fair with the intent to join the High Kings court and study directly under Kanziganthir. The fair was a tremendously huge thing, with hundreds of important people crowding the place and forming queues everywhere, so he didn’t meet Kanziganthir. During the fair he learned that the old ceremony master had just departed from court life and left on a ancient holy quest of Ye Olde Zaphirs. He didn’t join the Grimsborg court as servant of the High King] either. Instead, as he was recognized by old friends now in power, he was suggested as Skjald. Accepting the nomination, he was stunning in performance at the test, thus he entered the court as a Skjald.

Since my acceptance as Skjald I have tried to be as courtly and precise as possible when delivering information, yet I surely does remember all the curly little twists and personal agendas clearly showing when I’m observing people push their will or reporting.