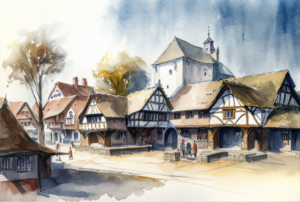 Tartu is a large City partly built opon ancient Markian ruins which can be seen around the City and in scattered underground tunnel mazes. Its been a centre for trade since dawn of time and Capital of Spiy for 11 centuries now.

In 1208 Second Age a handful of Nobility, Heroes and leaders of various Organizations gathered at Gramshirs Villa to discuss a plan to end all conflicts.

They wanted to unite all Hordes, Tribes, Clans, Organizations and Other Races around one table, under one banner, led by one leader – a High King. Although none where put forth, they did agree to follow the rules outlined in 1167 by Lauric Svartholtr, rewritten and extended yearly by Kanziganthir in accordance with comments and corrections from other Kings. Thus, one could argue that The Realm was born at that banquet in 1167 -most likely also the vision that cost Lauric his life.

Ruled by Mayor of Tartu on behalf of the King of Spiy.

At times one can find Ljostari things washed ashore or in the harbour mud, especially after stormy weather. The trickiest part though, is to get it sold -and survive..