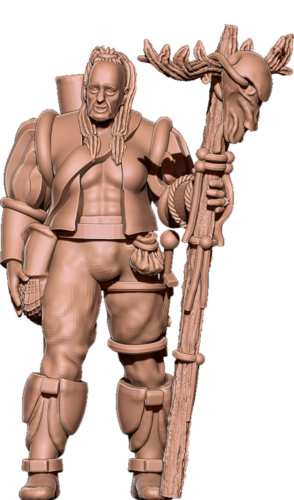 Lögumsmadhir to the High King

“The last of “the true blood’, born a thousand years ago, vitalized by aincient rituals… or merely a hoax wearing a fantom legend  mantle.”

I’ve heard some claim he is not the original Kanziganthir, but instead the great great grandson, merely continuing a centuries old hoax of a shaman of immerse power. Yet, one who ages so slowly that he’s seen Kings come and go. Regardless of this, Kanziganthir is, or was, without doubt among the most powerful shamans alive. I never met him personally but he’s said to have had vast knowledge about the myth and rites of Ye Olde Zaphirs and the rest of The Realm. He ensured everything always was in accordance with the ways of old. And if the legend is true, he would have known all of the original crew coming to our shores, and hundreds of great Kings and lords. If he still lives, as some claim, I’d love to meet him.

Some of the elders of Ye Olde have told me that should anyone diverge from their ways of old he would have a chat to restore order, which then was followed strictly once more. Most of the time, though, when he was not performing rites himself, he spent the time studying folklore and myth. Especially their brought along scrolls and tomes had his attention as he thought they might reveal a hint for their quest. Also, whenever he could, he oversaw prisoner interrogations and often he talked with merchants, huntsmen and rag tags arriving at their gates.

So, he was always busy with lore and stately matters when others ran for this and that skirmish. He always tried hard to find that little hint about the target of their original quest. Yet as time passed, and comrades withered away, their children’s children growing remote to their holy task, he longed once again for what they should be pursuing and felt discomfort with their growing role in shaping this realm. But honour bound, he stuck with his King’s bloodline and served faithfully as the crown passed from head to head.

In the reign of King Black Oak many things happened that stirred his pot… It all started with an increased traffic of other Kings, lords, guild and grandmasters and what the sea could wash ashore of so-called important people… Feasts, receptions, dinners, meetings, counsels and summaries took place at a ever more rapid pace…. Taking its toll on the servants and the scribes…

For it was indeed grand things being forged at nightly meetings and grand officials during the day… They worked hard to make a High King of Kings… to be elected every fourth year at the Coloured Fairs and governing due a set of laws based upon prior court decisions….

With initial work circling around him and with his deep and broad knowledge he was the prime pen in writing the Codex Hordium, a compendium upon which the High King and the Counsel of Colours based their ruling. And at the great day, at the first fair, it was with great joy he saw his King elected and elevated to this honour by his equals: Black Oak was indeed the High King of kings.

Thus, Kanziganthir passed his temple guardianship to Elder and followed Black Oak to the new palace Grimsborg. He stayed for three periods and aided at the Coloured Fairs. His looming presence, outstanding wit and sharp eye for details is attributed as one of the cornerstones in Ye Olde Zaphirs and the Counsel of Colours success in transforming The Realm from petty warring states to a realm of unified progress. But as the third fair concluded he bade his farewell to the High King, the Counsel of Colours and all the hundreds of emissaries, nobles and scribes he counted as friends. And without looking back he trotted out of the east gate to start his pilgrimage and quest.

Currently unbound any oaths and serves none but his own urge to complete their original quest. Alongside this, he find and destroy any foe of The Realm he encounter.

Able to perform a rite where he soaks up anothers Spirit, revitalizing him anew.

I’ve met him a couple of times and how he continues to stay vital despite being away from his temples and rites is a secret. Some claim it involves the release of souls from selected captives in a rite, others that it’s but a quick touch of the unfortunate victim. He doesn’t seem to me to be one such person that would live on at others expense, and should I be fooled about him it would be a first. One thing is certain though, the old careful selection process is no more, not only when he left for his quest, but also when the invasion struck and made a mess of society. So all of the gossip can’t be true.

Age is beginning to show on him though, so maybe the stories about him being the great grandson and not the original is true. Or maybe he is finally caught by the trap of time. Time he not only uses at the odd paths of the realm seeking his quest, but also to crush invaders and traitorous scumbags whenever he encounters them.