“The Vampires had just emerged, an abnominal force disturbing the balance of the Vornir scheme. Trying to reset things, all Divine Races became involved in the frey and their releashed energies spinned out of control.”

Through the oldest scrolls and books and talks with especially the Thursar. Who generally take no part in the schemes of the Divine Races and merely spills what their memory holds. It has become clear that the 1st Cataclysm was the result of released energies building up to an uncontrollable roar in a foolish attempt -some even fed this swirling maelstrom with gleeing joy.

It was an attempt to bring the Astral onto our World in full. Combined with the fact that Vampires, who can’t survive going to the Astral, had just emerged and some of the Divine Races was in outright war with them. Make us believe it was an attempt to destroy this new odd Race, who sprang forth from some Ljost- and Drakk Alfar.

We know it was energies released by many hundreds if not thousands of the most powerful Mana Manipulators. Weaving many Mana Threads in both direct conflict, as supportive force, or eventually just as a feed to the turmoil. In which some went raving mad and others ended up floating along their released energies in a dissolving screaming mist.

These are the Races we know participated in the fray.

The unleased energies reshaped the World in large landmass slides, islands sinking, mountains spiking up or crumbling. It also had a servere impact on the evolution on Archaic and odd effects on Flora and Fauna. But if destroying all Vampires was the aim, the Divines failed miserably as they’re still around, meanwhile some of the earliest Alfar sites, built with the aid of Divine Races and thus displaying the most wonderous cities, castles, bridges, etc., are now but memories in the minds of a few. 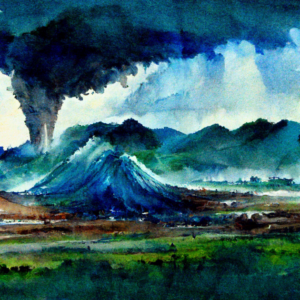 Its said that it was this that caused the World to tilt so that our Sun no longer floats around the equatorial belt known as The Rim. But, floats in an ellipse closest to the North- and South poles. Making them boiling hotholes and burning sands and The Rim a freezing experience.

Never since has the Divine tried to bring the Astral fully to our World, and we should praise ourselves lucky for that. Just see what happened with the Archaic and all the oddities that spawned south of The Rim. The 1st Cataclysm brought us nothing good.