“Once a realm strecthing from North to South of our World. But then The Rim cut it at the middle.”

Very little is know to us about these lands, farther away in trade and culture than in distance. As they have kept killing and enslaving those who dared travel there. This we know from Yell'a'Beard who is the only one we know of, who has traveled there and returned. And from the prisoners who spilled sparse phrases, or outright bragged about their lands. 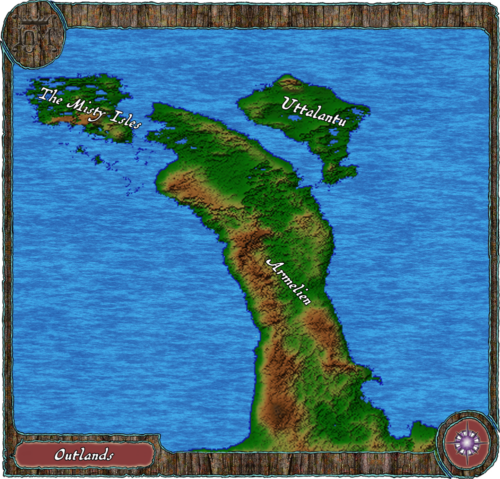 Outlands are inhabited by Races hostile and generally unknown to us. In fact I think I’m the only one of us who have been there and returned to tell of the sightings.

But up North, at the Eastern side of the peninsula sticking out from The Rim, they call Armelien, lies Utallantu, home of the Kinoblin. At the Western side lies The Misty Isles of which I know only the name and that Anurai originates from there.

Armeliens Northern half, Ragdim, is dominated by the Romasai. Who control the vast steppes but generally shun the mountains which are dominated by other Races -of which I know but this:

The Western, longest stretching, mountains, are called Kultu and are home of the Pigryn.

Theres two ranges at the Eastern shore, of which the Southern one is called Ocila and the Northern one is called  Lizard Lands. And there does indeed live Half-Human with Lizzard traits there. Southmost these lands, all the way down to The Rim, lies Uestu -land of the Mammutan

Each Race has its own leaders and distinguished cultures.

Don’t travel there, they will kill or enslave you.