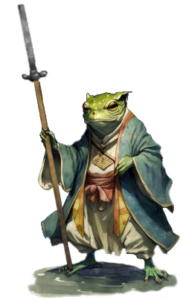 From fit to muscular.

Shades of  green, some brown.

“None other from the Mortal Races can jump like these, making cavalry and palisades as easy to down as anything.”

Of their origin we know nothing and neither does those of the Other Races from North of The Rim. And if the Divine Races know they won’t tell, so Anurai are in the dark for us. We also know as good as nothing about their homes in Outlands, except the little Yell'a'Beard managed to figure and the things pryed from prisoners of war.

As good as always seen in groups, dressed in cloth robes tinted in various nuances of one colour. They most often carry pole arm weapons as they are extremely agressive and rash. They are known to take prisoners to be used as slaves for hard labour.

They have stout bodies, short spines, long hind legs, elongated ankles, long feet, webbed toes. Frog like faces with huge protrouding eyes and their clawless hands have 3 fingers and 1 thumb. The skin of both types are glandular and can be toxix. But where Anurai have moist skin the Bufoi have dry warty skin. We have found that the dapple skinned brown, green, grey skinned generally are non toxic and the patterned skinned bright red, yellow and black ones generally are toxic.

They migrated a well organized monestary lifestyle to The Realm, thus their first targets was major castles and monestaries. A few of these are in fact still under siege, despite the Cleansing Crusade ended -they won’t jump anywhere. But this means they live in dispersed tribes at the Island of Markeöy and Naldar.

Their Nobility are as remote to the lowborn as any other Human and they show alligeiance to none but their tribes senior members. They are seemingly parted into two major types:

Anurai is the majority we have encountered, seeming forming their Warrior and to some extent Worker class if no slaves are at hand.

Bufoi is vere rarely encountered and are also more like Toads than Frogs, but don’t let the bloated look fool you. They are exceptionally strond and are known to be Mana Manipulators.

They have the ability to let their spirits walk the astral plane when in trance, thus being able to see ‘visions’ which might come true.