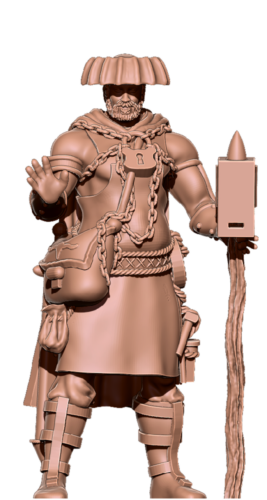 Hammer of The Bull Anvil of Muldum

“One of the few in the Human race so strong that he could throw anvils like others did pigs. His most famous delivery, the one that saved my life and splattered a Mammutan.”

Frantz Folke Jaeger was born by a Vular mother in Noriag as his parents was temporarily residing there. With a father only a quarter Naldar Frantz pride himself as full Vular and carry himself as such.

His grandfather, a martial house lord, who had moved from Jabos to Hokul with Frantz newly wed parents, due their Lord being caught in a political scheme. Left Hokul when Utari was hit by a Tsunami and travelled to Falbur and reformed their martial art school for the 2. time. With the coast of Falbur being raided they broke up up and crossed Midgard all the way to Noriag to live amongst a larger population of Vular.

There they soon realized that income for a Naldar inspired martial art school soon would be too low. Frantz father suggested they moved once again, this time to the gates of Fogwald, as that had felt like a cultural hot-pot when they passed through it.

So they packed their school and moved once afain, this time with a freshborn baby in the luggage.

As the school grew in numbers and renown so did their request of quality weapons. So, they began buying from the weaponsmith Frazier, often it was Frantz, now a young lad doing the trips and. It’s said that the son of the migrants on these met and befriended Deepminded and at times visited her at Kistal. There the young Frantz managed to fall into the The Well of Wisdom and almost drowned.

In 1213 he became a Blacksmith apprentice studying under Frazier in Fogwald.

Seemingly the plunge into was is thought Vornir water made him grow to tremendeous size. To think he’s quarter Naldar, the short people, reaching such proportions. Wonder what he been like had the he been Ogryl or some half Kobold, or T'Aurs. Standing well over 2 metres and around 175kg he is enormous. And if you ever withness him grabbing his anvil, then get out of the way. He can trow it like a small pig but it hits -like an anvil.

He studied the art of crafting but due the wisdom water soaking always wanted to learn more. So, when he learned everything his master could teach, he travelled to Ye Olde Zaphirs to meet with Lord Nam and share knowledge. It was at his stay there, he got the first invitation to visit Mt. Vula, handed to him by the God Relagin. Nothing is known about their visit to Mt. Vula. When they returned a year later, Frantz moved to Markeoy as he wanted to see the Free City of Muldum and meet the skilled T’Aurs Blacksmith he heard was residing there.

Reaching the Free City of Muldum it was not that hard to find a T’Aurs Blacksmith, as only one resided there. Frantz walked to the street with the booth and noted what was for sure was his goal. Sitting at at bench outside a inn called Owned Min'O, he smiled, as next door was a Blacksmith booth sign Mino's Owing. He walked up to the table and kept a polite pause, in which the large furry male nodded. Frantz sat down, carefully watching what was on the table, he ordered the same. To which the T’Aurs grinned, “so stranger you’re aware of the tale too?”. He excused himself and said no, but would not insult a fellow diner, if there was no need. Especially one he came to learn from, if possible. To that the T’Aurs grinned and said, call me Mino if you like stranger. Whats on your mind… and it poured ale for them both.

During their talk Frantz learned that Mino had only been a Blacksmith since 1182. Before that it was a great warrior, having its self esteem torn to pieces by a Human besting him in hand to hand melee. A sad day for a warrior, but a great day none the less, as that humbling had made him wander and seek a new meaning.

A search that brought him to a tribe of Kobold who noticed his true potential. There he learned many of their mechanisation skills and even had the honour to visit Mt. Vula. A place a warrior would never had seen and when he heard Frantz also bad been there -awed by its beauty, the coworking of Crafters and them odd Imps. Mino asked if Frantz noticed anything special about them Imps and without a wait for answer, he said that the Imps where in fact Dwarf Crafters of the 1st House. Who had been working alongside some Thursar when the Astral poured open. The Thursar transformed to their elementary form, but the Dwarfs merged with their origin, the ‘Earth Veins’ and the Astral. With that, Minos laughed and poured another mug for the gaping Frantz.

As months passed Frantz became more and more fond of the Free City of Muldum and became part of a growing crowd centered around Mino. A crowd that experienced the demise of Mino, as ge one morning was gone. So they sat down, at the halls of Mayor Tri-M and there they formed the Bulls Order, to honour their lost comrade

Frantz was at their furnaces working with a complex item when the gates exploded and a swarm of Pigryn and Drakk Alfar flooded the city. He fought bravely and was one of the few managing to escape the vast outnumbering.

Since hes been searching the paths, for Mino and Invaders.

Kan throw anvils and similar heavy objects up to 20 meters.