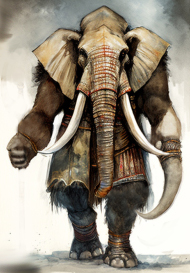 From muscular to bulky

Shades of  brown, some even dark orange

“In the Dark Ages Gods created these resilient Warriors as a tool to roam the pitch dark The Void and our World.” 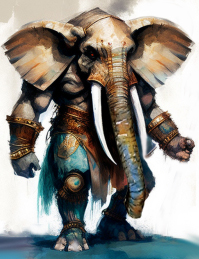 If the legend is true then no wonder nothing scares them, being a favoured tool of the Gods. They simply ignore any danger or disasterous odds, are quite capable Warriors, Mana Manipulator. The only thing that seemingly annoys them so much that they act rash are Fylgia possessed people. Must be something with the loose Spirit. According to Yell'a'Beard the saying over there was that they had killed most Outlands Fylgin and promptly hunted those discovered. But he was not down in their own part of Outlands, so he haven’t seen for himself.

How they evolved, if at all is beyond us but they have a very strong grip on Southern Armelien where they dominat the area known as Uestu. Yet is still eludes us why they joined The Great Invasion. 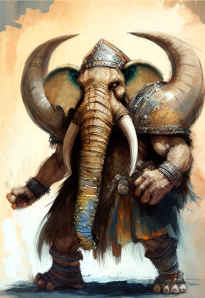 They are distinguished by being of considerable larger size than anyone else with great tusks, they even make T'Aurs look somewhat small. They seemingly favour a nomadic culture and are fierce Warrior-Beastmaster's, usually accompanied by several mechanized animals and beasts, wearing boxes, bags, quivers, tools and whatsnot.

The Northern Clans are non-furred thick skinned like Elephants and the Southern ones from down around The Rim are furred like Mammoths.

The only major variations we have noticed is that trunkless ones exist and these semmingly are far more able to bond with Spirits and thus function as sort of Fylgia Lot trackers.

Another, although minor variation are size of tusks and ears, with tusks we have seen no compensation done by individuals but regarding ears we have noticed that they tend to add shoulder enlarging armours -generally in the form of horns or spikes. 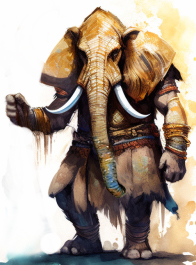 Back home they live in dispersed settlements either as Walder in small settlements, or as wandering Nomad groups. Here they merely keeps stampeding around and are hard to catch and kill. 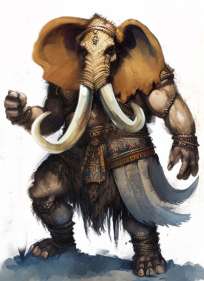 Exactly how they are organized we are unsure of, but we do know they are all males and most often are encountered alone. They are dispersed around The Realm in small Clan-like groups doing random damage as they see fit. Each Clan is led by a leader who decides everything -until slain in battle or assassinated. We have bever seen one betray its kind nor surrender willingly.

They have the ability to bind with others Fylgia, thus being able to see ‘visions’ revealing their prey.