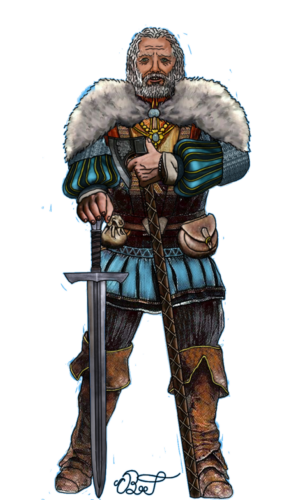 1st High King of The Realm

“Royal of blood and noble of hearth, but not born for a crown, he shaped The Realm and became High King.”

Solvarr Svartholtr became the 2nd born son to the king of Ye Olde Zaphirs in Zapri in the summer of 1154. He spent the earliest years fooling around as most other noble and royal born children not to take position. But, in 1162 his older brother died and he became the crown prince, so life changed and the burden of studies grew. Eager for the challenge, he faced it head on.

In 1169 hes preparing studies brought him to The Deep Inn at Halkistal owned by Deepminded. He came the very day after Kalmo had left, which Deepminded thought a shame, as that was someone Solvarr ought to know.

Returning to Grindaa he landed in a war between a couple of Hordes and in 1170 his father was killed in the spring. Thus, Solvarr became king of Ye Olde Zaphirs. He grabbed leadership of their allies and had them flock to their baner. It brought them the victory, and him the nickname, ‘the Black Oak’, as a black oak was the symbol on his personal banner and the feeling allies had of him being an oak resisting any storm.

In 1178 a skilled swimmer and famed treasure hunter named Tuuna joined, and was soon full blown member and had his own lodging at the step cliffs, just south of the city.

Sitting at the shore with Tuunain 1180, discussing their southern defences, they where approached by a man presenting himself as Baldur. Tuuna is said to have jumped the stranger to test his reactions and weapon skills, resulting in a rare standoff. It was not long before Baldur was a full blown member too.

1182 and the half Kobold Deepminded spoke so deep and warmly about, trotted through the gates. Kalmo came to Grindaa to visit Kanziganthir and study at their library.

Then in 1184 Krokus came by and joined, and 10 years later in 1194 Aragon joined, to experience both great joy and sadness at Grindaa.

In 1201 Black Oak hears about the courier service Regarir is building and visits their city incognito. Uncertain if he should use this new service or keep to the ones provided by already trusted allies. Deciding that splitting up information among deliverers was a wise thing, he began using it.

In 1207 Lord Nam comes to Grindaa and starts working as an Blacksmith and begins to mechanize the Hordes production gear and lines, as well as defences and attack engines.

Attending a meeting in 1208, in  in Tartu, capital of Spiy. To discuss with some other kings and scolars how the endless warring could be prevented. The attending Skjald Ulrich brought along a young man, calling himself The Pilgrim. This youngster was extremely smiler at melee and in duels with several lords, he only lost to Polski and Boneman. These days, I’m not sure they would end with upper hands.

Trying to strengthen his network, he in the spring of 1209 asked Lord Nam to go to help Lionel at island of Piecao.

1212 became a merry year as Krokus became Ye Olde Zaphirs Naval Commander. They had a state visitor as Bergon came as ambassador. But, 1213 also became a horrible one, shortly after Dogil came by and visited Kanziganthir, the wife and two children of Aragon was assassinated.

In 1215 Kanziganthir suggested that Lord Nam should be made jarl, Black Oak and the other elders agreed and a great celebration took place.

Then in 1216 a little known fact occured in Grindaa, as Sessy arrived to talk with Kanziganthir. Later that year she gave birth to a boy and a girl twins, but it was for sure not the offspring from Kanziganthir, but one of the  Gods was father.

In the year of 1218 Krokus and Amras talked Black Oak into creating a new layer of initiation, to sort the more brutal and less thinking applicants out. Thus preventing these to take the inner initiation test and become members. . As they where to construct at the gates, they could hide some of it as part of another construction. Thus, they built a large inn, The Burrito Hall outside their main gate, and handed it to Yell'a'Beard to run as his.

One of the very first to take the new initiation, Warlust, actually drowned during the dive and thus failing. But, hauled at shore, The Pilgrim and Pakara both grabbed by-standing goats, and started to slap life back into the dead-frienzied brute… who spluttering with rage jumped up, yanked the goat heads off and dived right back -to emerge at the pond with the axe. Standing outside my new inn, I saw most of it, and sure we had a blast that day.

In 1221 news hit his ears and he went to the Filled Bucket in Snaw, to study what Regarir was up to with his holy village.

1230 brought Black Oak an interesting comrade, at an official visit he encountered The'D Fish in Srillo, capital of Scia.

A wise man that he met again in 1232, when they attended the 50 year celebration banquet of Meanbone in the Junnatu Caves.

1232 Bergon visits Grindaa again and tried to meet with Aragon again, to discuss a secret told by Aragon. But Aragon had left, so the visit was but a few days. Days Black Oak spent watching who Bergon met and mentioned.

Then in 1233, a major power establish itself. The group of Dogil, Regarir and their lot from that holy village had moved to Markeoy, rebuilding an old monastery. Suddenly claimed all of the peninsula of south-east Braburg. Enraging not only the local kings, but also Nefius who asked Ye Olde Zaphirs to tag along and destroy these land-robbers. Looking it over, Black Oak declined as those upcoming lads, with their Holy Star Order had the law on their side and. Seeing them grow, did though concern Black Oak, and when Lionel in 1236 visited telling that Holy Star Order had attempted to land on his soil. Concerns grew, should he aid in destroying them, or ally with them for his own vision -it was a difficult balance, as they might be of use but for sure would not be controlled.

The Free City of Muldum was established a year earlier, but in 1240 Black Oak visited to experience it, and it was just the right time. Entering a small town square, he saw Boneman best a T'Aurs in hand-to-hand combat, forcing it to pay for skins damaged. Later he had a long talk with the youngster, offering him a space in Ye Olde Zaphirs as they surely could use such a strong -and admittedly wise comrade. The offer was politely declined but a friendship forged.

Better luck talking someone into his service, albeit subtle, Black Oak had in 1243 when Doodman resigned as court Herold.  I believe it was as part of the plans for  The Realm´and the High King institution. In the summer Atallanti also showed up to meet Kanziganthir and taught several members some unique melee skills.

Then in 1249 The'D Fish came to Grindaa aiding Black Oak becoming High King and things began to spin fast. Many lords attended, and in 1250 Black Oak resigned as king of Ye Olde Zaphirs and became 1st High King of The Realm. Instead Woodmaster became the Hordes king.

At the great banquet Black Oak announced his betrothal to Kirfol Kesten a Tatongol Princess. Ensuring a tight bond between The High King and Tatongol Hordes.

The new mantle, required that Black Oak in 1251, had to ask Den Godan to track up the lot from Holy Star Order and tell them they where treading dangerous ground, and if caught would lose the goodwill from High King and many Hordes if what they planned failed. Later that year Solvarr and Kirfol sired twins, May-bristle and Jack-fale. That winter happiness was shattered as Kirfol was kidnapped, by a crazy tribe of marauding berserkers, wanting ransom. Black Oak instead led his entire might to their front bridge and demanded her release or they would face utter destruction. One of the envoys almost went for his blade, but they realized it would mean death -so she where released.

Reelected in 1254, Black Oak in 1255 offered Gizmo the position as Royal Guard Commander due suggestions from Meanbone and other kings and nobles. Gizmo accepted the offer. In hindsight more a subtile revenge of Meanbone than a strategis clever move for The Realm.

1259 Kirfol vanishes when traveling from… to… leaving Black Oak with the 2 children.

Knowing his stamina and Magic abilities, it must have been quite a sight, when Black Oak in 1261 fought a spider daemon. It seemingly being immune to his efforts he was being worn down, and as he said, would have been the end of him. Had Boneman not come to his rescue, stepping in between High King and Monster with a smile. He whistled a merry tune meanwhile beating it to death.

When Black Oak resigned as High King in 1266, he opened a series of inns throughout The Realm called The Black Oak Inn. Then he went to Halkistal where he met with Krokus, and later that month Cronos came around and stayed the summer. Black Oak spent a merry time merely visiting old friends, telling tales and tending his inns.

Then things of Magic, Astral and nature began to shift and wobble. Reports of irregularities came to his ears, so he sent messages to a handful close friends, who in the spring of 1277, came to The Deep inn owned by Deepminded. Meanbone, The Pilgrim, Kanziganthir, and Woodmaster shared a table for deep secret discussions. The next day, the requested Skjald El Mary arrived.

There they decided to find out what was going on… which came to them not long after. In the form of The Great Invasion

A long devastating war, close to being lost had its eclipse in 1281, at the Battle of Weeping Plains. Where Human Hordes and Other Races previously not involved, swarmed the battlefield litterally saving the remains of the 2nd Alliance and destroying the forces of The Great Invasion. Many Heroes, Kings, Nobles, and commoners from several Races displayed outstanding valor.

Among these was Kaosfrog, who at the Battle of Weeping Plains was pardoned for any crimes anyone of The Realm had raised against him and knighted. He replied that they might have won that battle, but more Invader and traitors still hid out there, so he would hunt them down. An act, that triggered many to swear the Cleansing Oath

Both children had survived the war. May-bristle went to the mage tower as she where exceptionally gifted and Jack-fole went to Ye Olde Zaphirs to play his part as Jarl.

After the Cleansing Crusade Black Oak retired to enjoy life at his many inns and is thus often met traveling the dusty roads. Always ready for a story and a mug of ale, and if the encountered is an assassin in disguise.

He can go Berserk meanwhile keeping his wits and even Mana Manipulate in this state.