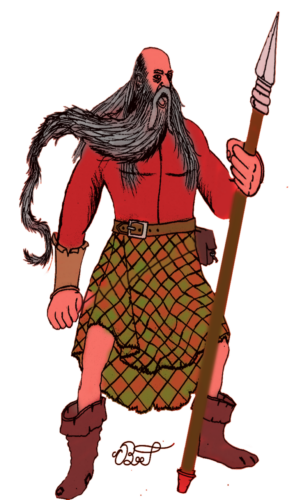 “None has ever been this strongly tied to Fylgia.”

Born in the southern rough-lands of Keshon in the town Urmantlu. His father a mere stable worker and mother who worked in the kitchen of the city guard. Lalli at an early age spent time helping with the animals and watching guardsmen train. At the age of 7, in 1166, he entered the guard force cleaning armour and honing weapons, giving his insight in weapon balance and armour strength and weaknesses.

In 1176 he left the guard force again, even though he had earned a place as guardsman and a steady income. Instead he went to work for a nobleman who on a trip through the crevasse, had recognized the lads skills for tending horses and other livestock. But after 2 years he left due to too many disputes with other maintainers of noblemen’s stables. He was simply too ferocious whenever he got into a dispute, justified or not, frenzy came easy to him -and he seemingly liked it.

Instead he began traveling Midgard as a market place fighter, offering quite some stash if anyone could best him. He very seldom lost, and when he did, he adapted and became increasingly better. One day at the marketplace of Ye Olde Zaphirs where he defeated several unlucky bastards, a voice rang out asking why he had to be that brutal. He replied that it was his choice to act as pleased in a duel, and the other one stepped forth and said, “Well then let’s fight ‘wild one'”.

The Pilgrim evaded every blow attempted meanwhile bumping, tapping, scratching his opponent. Seeing his anger grow then explode in pure rage its said he yelled, “My goodness what a burst…” and then he knocked the frenzied lad out.

During his stay there Lalli learned from the finest and became a slightly more subtle fighter, but still the rage came easy to him. it was actually as if the more he oppressed it, the more it wanted out and the bursts became increasingly wild. Caring not for the rest of the crew, civilians or foes, he just killed and maimed whenever in combat and more and more of his comrades began to shun him as crewmate. It had to come, and one day he stepped up to the great hall, announced to the king, noblemen and crewmates that he would leave for the wild and seek ‘True berserk’. Some relieved it came as a surprise though that some other skilled honourable went along to pursue in the seek.

It’s said that a few years after their departure they made a Strandhögg on their former home, under the banner of Berserk Masters they suddenly surged the shore of Ye Olde Zaphirs and made a quick brutal looting of some goods they seemingly wanted but couldn’t ask for. A act sowing even more animosity between former allies.

The wound went on for ages, but eventually at the Battle of Weeping Plains hostility was set aside and they all once again fought shoulder to shoulder, grinning as they slew Invader. As the battle was won Berserk Masters left for the woods and mountains again. But they have been seen all over The Realm since, hunting and killing foes.

Seemingly still king of his Horde…

Can go Frenzy at will.