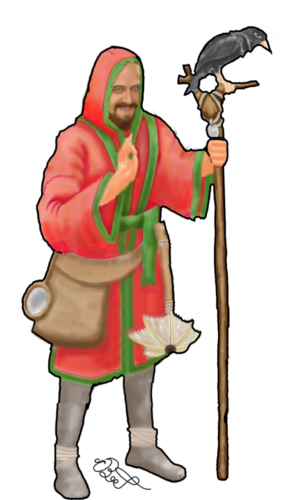 “In his brief appearance at courts, Enforcer for the High King and leader of Ye Crew. He distinguished himself as the greatest 'Duelist' thats ever been amongst mortals”.”

Born in Spiy, the eldest son of an Alchemist and a gem Merchant. He spent childhood collecting pretty stones and shells at the beach, to sell directly of barter with his parents customers as kids do best.

At times his sharp eyes also spotted real treasures, in the form of Shard fragments or various crystals and minerals from the mysterious island of Mt. Vula. The hidden crafters heaven was where some of his parent’s customers was about to visit or came directly from, when at their shop. It brought him great joy, his parents quite proudis greatest joy and the family quite some fame and coinage, when he sat in to barter this or that rare find.

As years passed he started to dive in the sea and climb steep cliffs. Hunting for even more precious finds, developed his Agility, as well as Stamina far superior to most of his kinsmen. It was also the beginning of his fighting career, as less skilled treasure hunters had to be dealth with. Generally they ended up not seizing valuables, but broken limbs, noses and jaws, while others was left maimed or dead. As he had no mercy for those rascals.

I was in Tartu, the capital of Spiy, as part of a meeting between Coloured Circle and some really powerful individuals. When I met The Pilgrim the first time. Having a break from discussions, I took to the docks to study shorelife close to and facing Mt. Vula. Approaching the piers, I noticed a large group of Merchants, bidding high sums for something a young man sitting on a large cargo box was holding. As I walking up I noticed it was an ancient fiddle and bow, which he claimed discovered in a dive some hours ago.

Something about the fiddle and him, made me believe it and I outbid every. I simply had to own that ancient instrument and it’s a buy I have never regretted. It was also the start of a close friendship only a few others have had with the Pilgrim.

I can assure you, I never saw anyone deal with highwaymen like he did, when I met him the first time. It’s no lie, that he even outshone me when I was in my prime, dealing with the lot. I, a Skjald,  was being ambushed when he came striding around the bend. Seeing them attacking me, his stride became speedier than most men’s and his leaps and slams with that mace of his.

It was like seeing ravens hack eggs I tell you. Big brutal combat ready men, suddenly stared blindly out of cracked heads and toppled dead to the ground. Never have I seen such leaping-spin skills before, or since. Despite all the apprentices he taught and all the other selv taught copyists who tried to do similar – oh, that fella was divine that day in Ebrar.

And I do pride myself that it was me who brought him along to the Gem Fair in Pearlin. And then to Ye Olde Zaphirs where he met Black Oak the first time. Firing off what would be the greatest pair in The Realms history. I bet that’s why they built me that tavern outside their gates, to honour me proper.

Its said that when Skjald Ulrich bought that fiddle, he also took the young man along and presented him to the counsel group. Where Black Oak, the King they worked to elevate to High King, invited him to a party later that evening. There amongst real close friends, all Kings and highplaced, Pilgrim ended up duelling Den Godan, Latinoor and Setil whom he all bested. Only Boneman and Polski are said to come out upper or equal handed. Some of them have told me it was the youngsters natural combat skills and demeanor, making them all agree to offer him a position as Enforcer for the planned High King institution.

An offer I’m certain he saw more as an opportunity to travel The Realm. Meeting all kind of people and learn what new skills he could find. Than a clearance to crack as good as any skull he felt deserved it. Anyways, he accepted and some of them have told me, that beside the frequent missions to settle things and resolve dues. He at times visited various households, in disguise, to learn as much about the lords and Organizations of The Realm as possible. So, I’m sure much of his present solitude is due to what he had to endure during all those missions.

Before… the High Kings round face got that golden circlet and feathered helmet… Mortican, the Pilgrim, the Enforcer, the Doctor… went from Diver of the deep and climber of cliffs… to Stallari of Ye Olde Zaphirs…

And my great god, he is said to have brought along half of Tartu’s harbour lads… leaving the rest to work double and swelling Ye Olde’s ranks so that their longboats almost sank when sailing out… It’s said to have been the greatest of their times…

In Ye Oldes lands… ye ye skilled he was…

The Pilgrim changed his mantle from Stallari of Ye Olde Zaphirs and became Enforcer of the High King. I’m certain it was not at the crowning, because some reliable persons told me that he wore Ye Olde’s colours that day and stood amongst the closest of friends and official allies and not at the other side with the new staff and court liasons. They claim to remember this clearly, as he at some point exchanged hard words with one of the other Ye Olde’s elders, but it’s unclear which it was. At the next meeting, if any at all I have to try pry towards the date.

It darn odd, suddenly seeing them elders all lose their stiff upper lips when that bold lad told that old whispering high-hat a truth or two. Something about the stupidity in sending weak sons to war, just because they were high-born, when much more prepared and eager low-born where ready to do a far better job. So, less mothers would cry and wither due to pointless losses. Despite my fabulous hearing, the crowd noise was such that I couldn’t hear. But it was bad, and I’m sure that was the crack that made the boat split.

And it wasn’t long before the Pilgrim took his leave and wandered out Grimsborgs main gate, with mace, staff and that darn bird of his… it even did me one shoe as they passed and I offered a gentle jest.

Some years later rumors began to circle. The former Enforcer had gathered a small capable hird and the lot had named themself Ye Crew. For hire as transport guard, city order restoration, feud settling stand-ins and outright law e forcing hammer. During that time few Skjalds net any of tgem as we alwats seemed to come gather info -about what had occured. But its said, that they even went into sacred areas of the old great Hordes to settle issues. From which they generally came back task solved.

I think I met him half a year before the invasion, when I passed by Fogwald I realized it long since I had spoken with Deepminded, so I took shelter for the night at the Deep Inn. Deepminded was a welcoming host as always, an introduced me to five persons she thought I should befriend. I already knew one though, and it was the former High King Black Oak.

All at age and some most certainly quite old, the seemingly youngest rose and introduced himself as Chieftain of Ye Crew, aka The Pilgrim, another as Meanbone, one as Kanziganthir, one as Woodmaster and finally Black Oak, which he commented that he thought I already knew. Hearing those names, seeing them at the same table, especially at the Deep Inn, I took the offer and benched myself.

It became a long night in great company, an embracing morning in the arms of an emphatic and caring man, and it was only late that next day’s evening they bade me farewell -and they all rode off, leaving me looking long, at a cloaked back slowly disappearing in the high grass.

Staying at Ashenhall at the time of the Great Invasion, I experienced several great Heroes emerging from the The Eight Mirrors in Zizu’s great hall. I never examined those mirrors at close range though, as I once saw a rather unpleasant clawed arm trying to grab a hold of the outside frame and drag its owner out. But one of the champions was the Pilgrim, who mentioned he came directly from Grimsborg. As I know of no Teleport Site are near Grimsborg, I assume the High King had one or more mirrors as well. He was there only briefly, talking privately with Zizu and Meanbone.

From the raised hallway chatter by nobles and officers running around, I realized Grimsborg had been attacked by some odd frog-faced enemies and that Zizu and Meanbone both would raise their armies and sail to help. The news that arrived later that day about the attacks on the Academy of Ri and The Beastmaster Fair in Grebi, sent waves of shock and disbelief through the already confused people roaming around shouting orders and checking storages.

It was my first trip through the Astral, and it was far easier than I thought, despite the length. And from descriptions I actually think I met the Pilgrim there at the many paths of the Astral. But it was a mere glimpse and then he was gone. As I knew Skjald Ulrich was at Ashenhall and I had no use for Shards if I died I used all I had in the jumps. So, at Aragon’s orders to bring news about the attack of Academy of Ea to either the High King, Skjald Ulrich or Zizu, I choose to travel to two of the mentioned.

I was quite surprised to see all the fuss at Ashenhall and I must surely have matched Skjald Ulrich’s expression when we shared news, because attacks at both academies, the Beastmaster Fair and Grimsborg, told of an invasion far larger and way more severe than anyone could imagine.

He is amongst the swiftest attacker of all the Races.