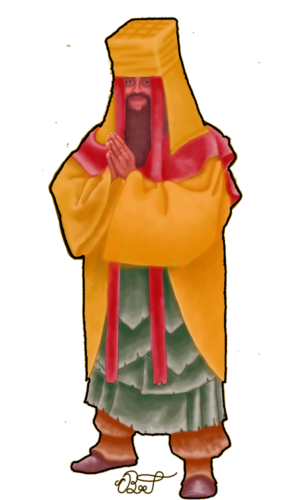 “Legend says he once had his head cut off, put simply put it right back on and msited his enemies.”

Born in Sloviit as the youngest son of a father who worked as gravedigger and a mother who sowed for the other families in the town. Their family had not much to give their 8 children but an early ticket to a workers life. I first saw him, albeit only briefly, when he was but a lad. As a former Skald was to be buried in their home town and his father had prepared the grave. I remember noticing the kid, who looked right back as if he could feel me scrutinize him, and then vanished in the crowd. Only later I found out that I could have interviewed him had I but known he was the gravers son.

I recall the lad standing for hours staring at the construction of Grimsborg. As if he tried to fathom the entire palace and figure out every hallway, stairs and room. I remember asking him his whereabouts and interest, and he told me he came from a small town in eastern Sloviit where the construction of Grimsborg had been the topic of everyone prior to him leaving it. I thought back then that the lad was well versed despite his age, but the day after we talked he was gone.

Once at a meeting in Efron with lords of Fur Oracles and Triad Traders I noticed him in the crowd of Scholars aiding with the negotiations of some trade concessions. I recall thinking that it was impressive how much details he could remember and that I should try pry into if he would become a Skjald. And as I focused on him I noticed he looked up and stared right at me with a smile. Then he left the meeting and I saw him not for several years.

I remember the fury of Nefius when the Holy Star Order called upon the Counsel of Light and the High King in order to secure their peninsula for themselves. A move forever sowing animosity between the order and the horde. And how his outrage became double when Bulls Order used the meeting to step forth and claim ownership of Muldum the capital of Skium. A petition led by no other than Ze Muff, who had become the archpriest of the order.

Is capable of the most powerful of all outbursts of all Human.