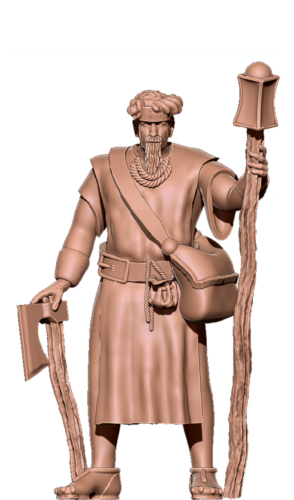 “One of the most splendid stories, of a nobles rise to power and inability to use it, is that of Nefius”

Born the eldest son of a King in one of the 5 Plateaus of Efron, he had to break from the princely child-life when but 9. As his father was assassinated by a rival, grasping for the crown of Efron. Nefius quickly adopted to the role and within a few years he had surprised every advisor -and royal rival.

At the age of 14, he was crowned King of the Five and at 18 he had outmaneuvered every other noble in all of Efron. Such was his cunning, that at the age of 20, the old King of Efron abdicated. Handing him the crown of all the Country.

Southern Efron opposed the coronation though and crowned a king of their own, claiming that all north of Edolph Mountains bent the knee. Quite a mistake, as Nefius didn’t march a grand army south to fight his countrymen at their home. Instead he used a tremendous amount of wealth hiring ships, sailors and assassins and started planning.

1 month before his 21st birthday, in the summer 1187, his planted army of helpers acted. The entire shadow court was kidnapped in both the kings stronghold at Mt. Ajba and in the capital Bumory in the Bay of Mewlo. And on an armada of ships anchoring up in the bay a single ship sailed into the harbour. There, on his hired warship, while the entire city watched. He proclaimed that the king of Efron could not accept, nor forgive, rebellion and treason. And every noble-born who had supported their king, was beheaded alongside their usurper and his entire family. Every one else was spared, and nothing was grabbed as loot.

His first act, as King of the united Efron was to promote local nobles to fill out the gaps created. He gave not a single seat of office or house to anyone from the north or his allies. A very wise move by a King to rule from far away.

Mountains no real obstacle for a man knowing what he wants, in 1188 S. A he began constructing a network of agents from all the men he had hired for the takeover. He started buying property in Braburg, Skium and Obran, using his wealth but their faces. Giving them new starts and well paid livings. All they had to do, was gather information and argument his agenda. And send earnings back, so their shadow empire could grow.

Its said, that when he became 30 he owned at least one third of each of the kingdoms at Markeoy. And with wealth just kept building up, unable to hire and buy in a tempo that could use the values gained. He started buying ships and created a gargantuan trade fleet, vacuuming markets as they docked, but never flooding anywhere with goods. This he had learned from a trader, Lionel, who came from south-west to their lands when Nefius was but a kid. And for very little rare goods, he recall the trader sailed off with goods to the reeling. That sight, he never forgot and over the years he came to do many a bargain with Lionel exchanging common goods and the rare Combat Herbs, for Kinoblin goods, southern furs, etc.

Then in 1190 reports began floating in that Kinoblin goods also could be bought from a trader in the north, Redhand of Shoak. Nefius traveled there to see for himself, he stayed there for a month sealing a close friendship with Redhand. But then words reached his ear, that the Kinoblin was asking to buy beef, huge amounts of beef. But it had to be kept a secret as to not disturb Lionel or that annoying King Black Oak of Ye Olde Zaphirs. Nefius knew of just the right guy, far from both and with lots of highland cows, good ‘ol Longhorn. The very one who sold him tons of Junnatu Weavers meat back when he prepared to take south Efron.

He sailed there directly and offered Longhorn to be part of what they would call the Triad Traders, a pyramid of immense size and wealth. The leadership would be Longhorn, Redhand and Nefius.  Nefius as King, had to spend too much time managing his court and adhering to the Law of Hordes. So he would be but in the council and fund it with gold, ships and men. Longhorn agreed to be the up front, but he wanted one third of earnings. A deal was made and Triad Traders was born.

Nefius spent the next 60 years provisioning the Kinoblin, certain they dried the beef and sailed it home. Had he but known he was feeding a growing shadow army, he might have acted differently. Act he always did, so when a few old friends, in 1239 asked if he would be interested in helping create a united realm. Forbidding warring, raids, and plunder to stabilize trade. He joined the wagon and became one of the few equals King Black Oak counted as friends. Oh had that blind ‘ol tree been able to see what went on, I guess we’d seen a proper duel.

Anyways, Nefius aided Black Oak in forming The Realm and to his surprise also crowned as High King. Seemingly there had been an inner circle within the circle, with a second agenda. Because as soon as the High King sat on his throne, the almost completed great-hall echoed of words forbidding the use of Thralls and Combat Herbs.

Its said that the outlawing of drugs cracked the friendship with Black Oak and might have been the irritation point, making Nefius get far too upset in an argument over his daughters possible marriage to a non-noble in 1257. Despite Black Oak insisting that Nefius daughter and this lad was the couple that would sire the savior of The Realm, and he would pay him whatever asked. Imagine Black Oak advocating an Allele Diploid agenda.

Nefius became so furious he drew his dagger and sliced the air between them to illustrate what he would do to that lad if he touched his daughter. Black Oak knew Nefius rage and the origin of the blade, so he stepped back… tripped over a bag of grain and fell out over the fence and down into the turning mill-wheel.

Nefius stopped knife moving, froze and aside the large thud he heard nothing but the grinding of the mill. Slowly he looked out and down, and saw but blood smeared stones grinding a bloodied mass of grain and cloth. He had just killed his friend, former King of Ye Olde Zaphirs and High King of The Realm -and knew he was doomed. Panicking for the first time in his life, he couldn’t think straight and ran out the windmill. To his mansion and then to the harbour and sailed off.

He spent the next 4 years hiding, none know where. Then he learned that Black Oak was alive and sent a message begging forgiveness. The answer came 6 months later, when suddenly Den Godan stood in front of his mountain cabin calling him out. Knowing there was no point in fighting this messenger, Nefius listened, and traveled along to Grimsborg

There he was pardoned in front of all the court and was told that the blame was to be on the Combat Herbs and it was thus the High King opposed them. Nefius went back to Efron where he discovered that the Holy Star Order, the Free City of Muldum, Longhorn, Redhand and many more had acted swiftly and filled the vacuum his absence created. Efron even had a new Queen and King. His daughter and that lowborn pet of the High King.

So as 1262 dawned he began plotting his way back to the top. But, it was as if his every move was anticipated and countered by opponents not wanting to allow him foothold nor give him room for more maneuvering. But finally as the sixties turned to seventies things began to work again, and he slowly climbed… then The Great Invasion hit hard.

The Realm crumbled, old Hordes was wiped, organizations dissolved, proud housed slaughtered, his daughter raped and burned along his dying grandson inside the throne room. He has since killed countless of Invaders and traitors, and mostly walks alone as if seeking death -maybe in grief that he helped fed some of the invaders.