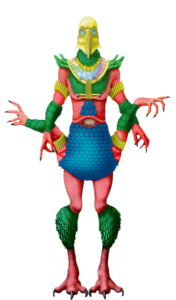 Shades of  red, some even brown.

Mostly feathers in green and blue.

“Had we known they would swarm across The Rim, we would have had a force to  welcome them with arrow rain.”

Taller than mankind and even the T'Aurs are these shapeshifters from south of the Rim. Their origin, a fact stated by Themac and his crew. As they were camping at the Lofgren Peninsula, when these bird-men came flying across The Rim. They fancy wearing masks, elaborate jewellery and have four arms -two of them changeable to birdlike wings. Their amount af arms makes them capable of extreme weapon handling. They are also well versed in Mentalist Magic and thus it’s rare to see them with any form of weapon.

On this side of  The Rim they now reside in dispersed groups. Maybe it’s in tribes of related ones or a guild of similar skilled, we do not know. But each collection is said to have displayed somewhat similar traits in magic, almost as if it’s an elaborate form of what’s rumoured to be the Allele Diploid agenda.

Distinguishing male from female is hard though, as both seemingly carry their eggs in their ‘third eye’, at the lower front of their body. And it’s funny though, with the way that ‘eye’ looks at distance. It’s very similar to ancient Vular and Jomzaar symbols of religion and magic.

They have a strict social hieracy, where the low ones are prepared to die in protection of the high-born, a fact regarding both those who appear to be female and male. They are mostly seen scouting for other shapeshifters, studying these for a while before swooping down and killing their prey. But also seems to be searching for something, or watching out for enemies. Extremely aggressive, they kill anything that gets close and if slain the remaining ones try to carry the dead one away. Thus are studies sparse, but none the less they have been investigated and dissected. I heard interesting things was discovered regarding their masks.

Able to shapeshift by transforming their lower arms into wings… and fly for long distances meanwhile being able to meditate and thus cast spells while moving, very unusual for what appears to basically be Mentalism users.

Themac told me when we last met… that he had encountered a blueish troll like giant fella at The Rim… preparing to kill it, it instead offered a mug of ale… and told a tale… It had followed the Aquarian across the mountain range as it needed some of their ‘Birthbone’…

Hearing that there was a foot-path across the mountains… Themac interrupted his camp-fire host and inquired about its location… unwilling to share, yet he insisting on gaining information… the giant grabbed its mallet… and soon lay dead on the snow… sadly the tracks it had made died off after a few days… but he thought himself close to finding the passage… and he’s now also hunting these as he want to see and get that ‘birth-bone’…

It was a beautiful morning with students running out onto the morning wet meadow and starting to morph and train, laughing to the first rays of sun . Idyllic life and joy as students at Academy of Ea was a price worth paying for any gifted shifter. Then a slight humming grew into the sound of wings flapping making them look up and around, and at some point a student yelled, “Wow, look at them colourful birds. What are they…”.

Then another student suddenly lifted off and fly straight upwards, with a surprised and merry ‘woohoo’. But when the student kept going upwards, joy changed to fear and at the same time another student exploded in a spray of blood -meanwhile the flying one plummeted towards the ground. The horror of the exploding comrade did not hit anyone, until the large thud of the falling one snapped the silence.

From then all was mayhem and those who managed to flee, say that the last they saw was a large Aquerian facing Aragon and holding him afloat in a tight agonizing telekinetic grip.