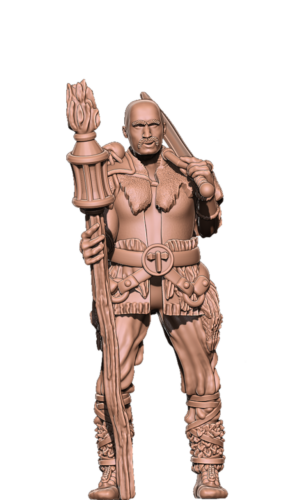 Explorer of the Rim

Cartographer of The Realm

“For a Human he has travelled more than most elders from any Race.”

Born in Port Merono by a Scholar from Darin and a local Scribe. He was the youngest son in a flock of 6, and from an early age interested in his fathers stories about the mysterious frozen land down south. Especially the high mountain chain called The Rim, stretching across the entire planet, had his interest.

Living in a port he had access to the sea and became an excellent swimmer, and with mountains nearby he also became a skilled climber. In 1189 the family sailed off to visit the birth-lands, but when the ship was between Efron and Spiy a storm rose and sank the vessel. Themac drifted ashore in northern Spiy and after a fruitless search of other survivors, he became egg-collector at the cliff sides of Spiy.

A year later he was at a tavern in the docks, when Skjald Valgrif asked to share table. A good long talk later, Valgrif had persuaded him to travel along to Darin telling his tales on the way. The next day when they where at the docks to find transport, a vessel anchored for provisions and one one of the crew. A large muscular fella carrying 3 large sacks of grain caught Valgrif’s eye. Recognizing the colours of Ye Olde Zaphirs he approached and asked the mans name and the ships destination, “Pakara, Tornix“, the man grinned and trotted off, with a nod to Valgrif’s pledge to board as passenger

So the hardest part of the trip was settled and soon they sailed south. At sea Themac noticed some odd mist at Larboard and was told that out there in the mist laid the volcano named Mt. Vula, only approachable through the Astral, or magic devices. Puzzled, Themac decided he would one day go there, by boat…

On the trip he became intrigued about Pakaras stories, so after a short stay in Tornix he went with Pakara to Ye Olde Zaphirs. And within a month he was full blown member of their Horde, roaming their borders with Dagthorr, Myth and other hardened warriors. During patrolling the lands he became fond of mapping the lands and finding paths, and as his skills grew he challenged himself to find lost or secret paths. Training his orientation skills so he one day could best the mist of Mt. Vula and it was during these expeditions that he trained for visiting and mapping The Rim. The impassable wall of mountains blocking off a fantastic rich world with odd creatures and riches beyond imagination.

A month later, in 1191  he was again in Tornix hooking up with some fur hunters, aiming for The Rim to collect rare furs. He stayed there for 6  years, trying to cross the wall of mountains, without success. One day in 1197 he heard familiar language from a nearby table at the Hunters Shelter, so he rose and walking over asking if he could join.

It turned out it was Coposim of the Monster Hunters, who had slain what turbed out to be a Mammutan and now roamed here for even bigger ones. Themac thought this odd news, but knowing of their library and old wise ones he and asked if Coposim would care to come to Grindaa and tell about this creature to Kanziganthir. Certain he could aid him with access  to their library and research. So in 1197 Themac and Coposim stood at the great hall of Ye Olde Zaphirs.

In the autumn of 1220 after Themac had several trips throughout the Isles he was again at The Rim. Where he one day in a remote mountain pass, saw a odd ape like creature but surprisingly lost its tracks. Telling of this at the next inn, the words spread throughout the Isles.

So in the spring of 1221 he was approacged by Sessy, Nahita and Wilson. Who was looking for him as they wanted to hear about the Ye'Til. They joined forces and found many an interesting paths, but not a single specimen of the creature they sought.

Ecentually, in early 1223 Sessy left, and late in the autumn Nahita and Wilson departed as well.

But he was not alone for long. I’ve heard from Themac, that in 1224 he met Aragon and Aragons mentor, Vervur Mortarr, at The Rim. They where studying how Magic outbursts was influenced by the odd anti- magic and spiritual area and he showed them secret paths up the mountains so they was as close to the top as possible. Aragon told me that never again has he been that far south.

Back again in 1232 Themac met a bewildered youngster, dressed far too lightly and uncertain where he was. It turned out to be Krokus who had teleported himself to The Rim. As Themac possessed quite a lot of Shards, he led him back to the site and they activated it and stepped onto the Astral. Themacs navigation and orientation skills eventually led them not to Grindaa but across The Rim. Where he finally saw ‘the world beyond’ and with utmost care learned some disturbing facts about the other races and drastic politics brewing. They revisited the Telepert Site and returned to The Realm in the winter of 1234.

Back at The Realm Themac went straight to Black Oak and Kanziganthir where he stayed when Aragon showed up to see their Hordes might. Aragon joined their ranks for a while, and they trained quite a lot together but an assassination of his wife and kids made Aragon retract and leave again.

Themac spent most time patrolling their lands and studying at their library, and even though he attended coronations and fairs he generally stood in the shadows observing. His trips to The Rim became rare as he had learned that Teleport Sites gave him access to the Astral and from it he could enter our world anywhere he liked. The only problem was returning, so he began intense studies in Astral.

It was mapping Teleport Sites that brought him back to The Rim in 1253, where he met Sessy and Zyr 'O' Loth. Sessy agreed to show him a physical pass she had learned off and he traveled along. And it was on that travel he for the first time encountered a Dragon.

They where about 100 kilometers south of The Rim and chosed to enter some tunnels that looked like they could be underground river going beneath a large mountain range. Deep within they entered a rather large cave and as they had crossed halfway to the other end walking towards the sound of rushing waters. When suddenly they noticed something glimpsing in the shadows of their light. Reaching it, they realized it was the scales of a living creature, larger than anything they had seen before. Suddenly a large reptilian eye opened and they could hear its puzzled voice within their minds, “Your kind of Human, south of The Wall? Something bad must be brewing and it should not boil.”. Their long experience with danger saved them, because as it rose to its might in but a heartbeat and spewed fire at them. Themac shielded their minds, Sessy shielded their bodies, and Zyr ‘O’ Loth transformed himself to a living fist of Gulmur. With insane speed, boosted by his comrades, he charged in and sliced the belly of the Dragon and severed one of its feet. As it shrieked in agony he swung himself up on its right wing, running the few steps towards its neck as he cut through the wing, rendering it useless.

As it turned its head to engulf him in flames, Themac made a staggering outburst and gave it a mental blast halting it for a heartbeat. Then its head was engulfed in a rainbow of coloured flames and it ended its utter confusion when Zyr ‘O’ Loth forced his longsword down deep into its brain. Frozen by the steel to brain, Themac dodge jumped forward and with his famous spin he cut its head clean off. Thus the trio survived awakening a Dragon and Zyr ‘O’ Loth gained his ‘Dragon Twins’ weapons.

Then in 1277 Kanziganthir had felt a shift in things and asked if he would visit and examine The Rim again. So, there at the Lofgren Peninsula he stood, when hundreds of Aquerian came flying across The Rim. One eyeing him and deviating from its path it swooped down -knowing that here at The Rim, Magic was weak, it came for him as an easy target. A severe mistake as Themac’s skills with ‘blade-jumping’ quickly made it loose its legs, then head. Thus, did Themac become the 1st slayer of an Aquerian”.

He hurried back to Grindaa only to find it razed. Then in 1179 he finally caught up with the remaining of The Realm and the Cleansing Crusade

Due his intense travel and stays in mountain ranges, The Rim and at the Astral he has an outstanding Stamina.