Large to muscular to stout.

Mostly brown or black but any colour or tint have been seen.

“3rd born Wanderers, yet they surpassed all other Human as Alchemist and Mana Manipulator. Rivaled only by Ljost Alfar, with whom they eventually waged war and defeated. Which brought the triple wrath of Boriac, Gods and Vornir alike upon them. Resulting in their downfall and the sinking of Ljostari.”

According to Kanziganthir the lore of old from down beyond The Rim stated that they where born after the rise of  the Jomzaar. They surpassed both them and Rimzir in skills and use of Magic. Their legend said that they advanced rapidly due their proximity to the god ‘Theseus’ -a bull-horned God.

Claimed to be the first Humans who walked across The Rim, before the War of the Gods which closed the passages. Here they settled at a great Isle alongside the Ljost Alfar and build the Vularian Empire, which sank beneath the ocean when Mt. Vula erupted.

Their lifespan is said to once have been more than a thousand years, but it has declined through generations. Yet is still greater than that of other Humans. They are capable of feats of greatness many have gained respect from leaders and Champions from most races. 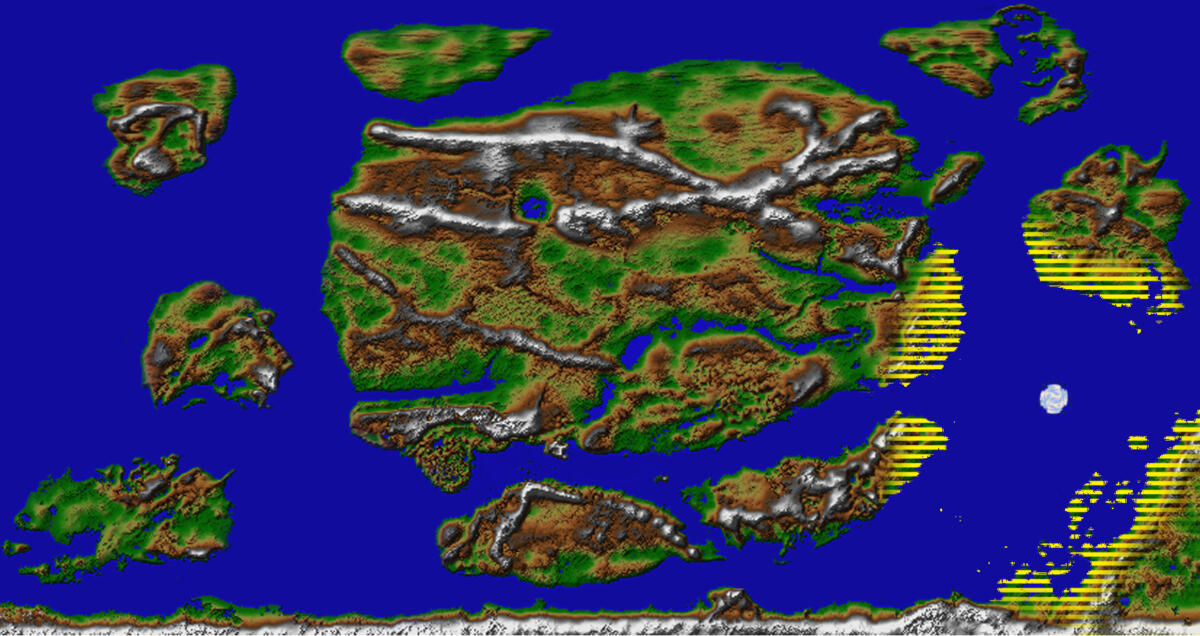 They are either powerful individuals of study or crafting living isolated, or are tied together in communities with a strict social order. Often with several rivaling families forming the core of the various cultures, mainly in shore-lands where they can see the distant fogs covering the now unreachable Mt. Vula, East Fjella, Markeoy, Midgard, and some also live in Darin.

With their former royal line being broken, they now have a Steward as leader of each community. Among these they elect a lifetime Chief Steward, having the final say in all Vular matters. They have no central court as such but frequently visit each others towns, cities, guild houses, strongholds, etc., so they uphold some sort of earlier times court behaviour. Many also frequent the courts of other Human and other Races and thus several know languages such as Nimzaxian.

As each settlement have a standing guard training as if it was military, they can quickly gather hard hitting, well trained and equipped, and exceptionally disciplined. Members are generally male, enlisted for a 7 year period in their early twenties and taught in both weapon usage, medical skills and tactics. Thus, they are formidable in war and in not outnumbered will punch a dent or hole through any opponent. They are also easily recognized  from each other on the battlefield as they proudly don uniforms and heraldry unique to settlements and families. Their colours and arrogant approach to display their force before entering battle, is generally a way to determine if its Jomzaar or Vular appearing in the horizon.

They rely on death to foes before melee contact and therefore use quite a lot of missiles, pikes, and heavy cavalry. But also heavily armoured and hard hitting infantry, long range war machines, and to some extent mercenaries who bleed willingly for gold.

They are also one part of the ancestors for the Human Realmar and Common.

They have no specific allegiance towards any of the Gods and shift between them as they see fit. Mostly they do so to benefit them in their daily workings or their grand schemes. They are proud and most often acting rash or impatient towards other races and lesser men. They dislike the Jomzaar.

I admit, I’m pleased they threw themselves into fighting off The Great Invasion at last. But i honestly think they could have acted swifter. Oh well, I assume they where trying to figure out if the situation somehow would enable them to enter Mt. Vula. But when they did enter the fray, oh man, what fighters they are.

Especially one episode stands out to me. I was fighting a mob of Pigryn and out of nowhere stomps this gargantuan Mammutan -as I see it charge in I hear a large yell, “DUCK YER’ HAT GOLDY…” and I luckily did kneel. So, with a large swoosh an anvil flew over my head and landed smack in the face of the stampeding monster. Knocking it stone cold and toppling dead into my foes. That, was my first meeting with F.F. Jaeger.

As some say, they are master craftsmen. For example, F.F. Jaeger invented both the lanterns and wicks now used in the lighthouses throughout The Realm.

I once was so lucky to attend one of their rare grand meetings  of stewards…. where I heard an odd tale about the days of old, where they came from somewhere else before passing back… following their master as ‘He’ fled south from some mighty divine pursuers…

Afterwards, when I tied to pry deeper… even with my most elaborate ‘tweaks’… I gained nothing but brief phrases as heard earlier… But I suspect, they might come from Outlands…