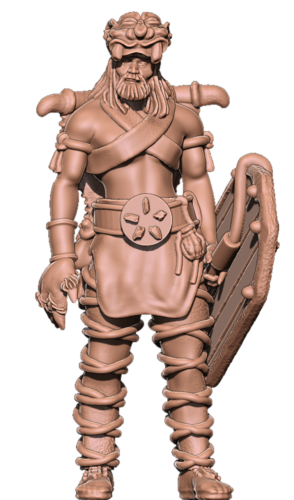 “Such talent… such tragedy… such seldom seen.”

Born in central Esly at the shore of Gratu Plateau. He grew up with easy access to the sea, great mountains and trade caravans from Pulvar, at the border to Oglan to Beryllon Bay in the south-eastern part of West Fjella and from Claun through Gratu Valley.

The town of his birth, Solvang, was a thriving trade center of its own and the object of many a Mulvas Prince, due its strategic location. So he also had the opertunity to see political struggle at first hand as he grew.

And did he grow?! At the age of 6 he was more muscular than any of his comrades, way more hairy and had an odd fondness for wild animals, often making him to wander off with them. Around the age of 12, he for the first time showed the hidden abilities buried within his blood as he, when robbers ambushed his parents shop. Where thrown into frenzy, grew in size, vexame almost furred and nails and teeth became tools of destruction. He was in fact, a Shapeshifter possessed with a Bear Fylgia.

The incident of his shifting chanced his life forever as most kids then began to shun him, it was only bold brawlers trying to best him, or curious girls for the score, that came close. So he more and more preferred the company of wild animals, and even beasts of nature. This went on for several years, until he was approached by a Shaman from Academy of Ea, who had been studying the self taught lad for a while, and was impressed about how strong the Fylgia seemed. Meanwhile Aragon used it so little, as if unaware of its potential.

Asking the lad why so casual towards his guesting Fylgia, its said Aragon replied that the residing spirit was not ‘his to use’, but merely happy it co-existed in his body. A very good answer and maybe the sole explanation, for the extremely strong spirit lingering inside. Aragon was though interested in learning more, especially from a person with capabilities as himself. Thus, he bade his parents farewell and journeyed with the new Teacher across West Fjella for almost 10 years. Meeting other Fylgia possessed persons and learning to control it when situations got out of hand.

I’ve heard from Themac that he met Aragon and his teacher, Vervur Mortarr at The Rim. They where studying how outbursts was influenced by the anti- magic and spiritual area of The Rim. Themac showed them secret paths up the mountains, so they could be as close to the top as possible. Aragon told me, that never again, has he been that far south.

I was in Usai, in the Port Uslur when the ship came from the south. Some workers and sailors jested that it had to be Themac as he was the only man crazy enough to roam The Rim. This arose my interest, as I had not yet met this famous Cartographer of Ye Olde Zaphirs. But as it turned out, it was his ship but alas, he had stayed in the misty south and only lent his ship to a couple of Shamans. They where heading for Ea and planned to go through The Grey Crevasse up into Tusla and from there sail to Ea.

I asked to tag along and they didn’t mind, so the 3 of us bought provisions and to this day I’m glad I followed the urge to do this. Not only did I meet a Hero to be, famed for many things. But as they realized I was a Skjald they told me many things about Shamans”], Fylgia, Berserk, The Rim and what they cared to share regarding their newfound friend Themac.

At The Grey Crevasse I realized why Vervur had chosen that path. There we met up with Wrekazi. She had so much to teach Aragon that we stayed for 2 months, in which I got to know her in more ways than one. As they all was to move on and the time for our yearly Skjald meeting was approaching I traveled my own way from there.

It’s whispered that Wrekazi taught him secrets of Hand Weaving in return for his Truename. No one knows the origin of that rumor nor if its true, but one thing is certain. When Aragon came to Ea, at the very moment he set his foot at the shore, all animals and beasts on the entire island fell quiet and several Shapeshifters has told me that for one short moment, it felt as if their Fylgia abandoned them.

So rapid was his learning at this rare Earthnode that he skyrocketed up through the ranks. Some say that it was his and all other Fylgia present that made his progress so swift.

When he decided he had learned what he could, he left Academy of Ea and traveled to Midgard. He did this as he had once again heard of his old friend Themac and a king Black Oak of Ye Olde Zaphirs in Zapri. He told me that what especially interested him was tales of their Shaman Kanziganthir who where said to be a thousand years old. So he trotted out the gates and jumped aboard a ship. To reach that Hordes home and see for himself.

When he reached Ye Olde Zaphirs he soon became involved in their fighting with other lesser Hordes and ended up as one of their officers. He had a merry life and enjoyed worldly matters, spoils of battle and the chatter around the campfire. He had a wife bearing him 2 kids, but they where lost in a assassination attempt, supposedly planned by Spadig.

It was this incident that made him retract into himself, only caring for further studies of Fylgia again and after a while, leave for Ea Academy once again.

Several years later, after Black Oak became High King, Kanziganthir came and stayed with him for a while. It was during this period that the elders of Ea Academy elected Aragon as Grandmaster. Some have told me, with a blink of the eye and slight smile, that Kanziganthir was key in their decision. After the election Kanziganthir traveled on and Aragon filled the new role as Grandmaster of Ea Academy as he could best.

At the day of The Great Invasion, he told me that it was the skills acquired at Ye Olde Zaphirs that saved his life. As the Aquerian countered every Fylgia and Magic attempt, seemingly able to keep spirits paralyzed. But with one final slight of hand, shoulder twist and insane spine bend, he managed to release his morning star “Claw of Ea“. As this mighty artefact has the ability to animate its claw without bearers swing, the twisted strings of Eas blood, brought the claw nails up into the chattering beak-face of that nasty enemy. But how he escaped Ea only he knows, but he did and are now travelling the paths of The Realm. Splattering the heads of Invader and traitor alike.

Can go into berserk, yet remain control of his mind.

He cas a legendary artefact; Claw of Ea