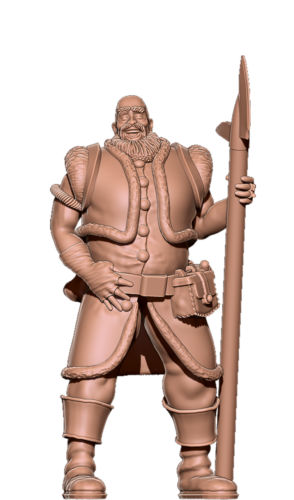 “Born into a life in the marshes, his squeaking grin while fighting Anurai, earned him his nick.”

Clouds laid heavily and rain poured across southern Braburg, just the weather Reinar Gjallar liked. It kept the officials at home, and covered traffic in the Melton Marshes. So he was out doing his young master’s work, transporting Combat Herbs through the deadly area.

Late that evening it thudded heavily on their door, waking up the heavily pregnant Alvi Gjallar. The pounding could only mean two things, her husband dead or worse, officials finally catching him. But what his friends brought, was horrible. Reinar seemingly had been attacked and was dying, the wounds inflicted came from nothing they had seen before and one of the men, who where hidden in the tall grass awaiting the load, said he had seen a very tall bird-like thing suddenly descend on the boat, and as its wings turned into arms, all four of its taloned hands ripped and slashed Rainar and his friend to pieces.

Seeing her dying man, labor struck and her water broke. 5 minutes later, Urai was born, and with his last breath Reinar stroke his sons head gently, and smiled. As the infant cried through the night, along its mothers tears. The house slowly emptied.

Growing up the child of a man slain like his father, shrouded him in a mystery that gave him opportunities few others had. He’s mother had died within a week of his birth, so he had no ties to anyone but the family who fostered him -for the silver paid by his fathers master. And at an early age he began helping at the docks in Port Melton, mostly he was at the pier aiding boats and ships to land with a boat hook or he was out in the marshes examining and clearing paths with a billhook.

I guess it was the story about his fathers demise, that made him a always chatting-grinning-jesting guy when working, as if to keep things away with his merry mood and broad mouthed endless chatter.

In 1216, at the age of 20, due his knowledge of the marshes, he was offered the position as captain of the channel ferry sailing between Port Melton and Marsketop. A job considered easy by most, but those who really knew about the shifting sandbanks and moving islands, they knew why he got the job. Steering it for 10 years straight without a single accident made him a renowned captain.

Then in 1226, a event occurred that gave him his nickname. They where slowly zigzagging around some previously unseen large grass island, when suddenly 3 Anurai  jumped on-board and started to slay passengers and crew alike. One managed to land on the deck though, and squeaked sprawling as it fell -Kaosfrog had thrown his billhook and it had severed its one leg. Another leaped at him, kicked the door he threw open to pieces expecting to cut his head in half with its halberd it emerged through the rain of splinters. And felt his boat hook pierce its throat and nail it dangling at the cabin wall.

“Hey, you. You’re next.”, boomed his voice across the chaos. Forcing the last one to turn around, stare at him. It’s fellow attackers hanging dead and dying with gibbering moans on the deck. It leaped, swung its halberd, and as it was to impact his broad smiling face. Kaosfrog’s hands clapped tight at each side the blade, “Oh, I’ve waited for something like this. This for my father…”. And to the wide eyed squeaking of the Anurai, a equally gibberish sound making Kaosfrog mocked it openly, as he slowly forced the halberds blade back towards the face of the attacker. And with a nasty grin, he forced it into the forehead, through the brain and out the back of its neck. Finalizing the move by nailing it to the wall.

Then he turned his attention to the dying one at the deck, stood across it and whispered, “Pop, it goes lad…”. Then he stomped its back grabbed its cheeks and pulled the head off its shoulders.

It was not before he threw the head into the marsh, he noticed the silence. And as he looked around he saw all other merely staring at him in utter silence. Then someone said, “Kaos’N’Frogs, Urai rocks!”. They spent the rest of the trip cleaning the boat, presented the attackers and casualties to the harbour master in Marsketop. And that very same day Kaosfrog announced he would steer the ferry no more, as there where more dangerous channels for him to sail and keep safe.

Even in The Great Invasion… he delivered life and death…

For the next 25 years he kept the marshes a more safe place for anyone to travel. But when the High King and the Counsel of Colours forbade the use Combat Herbs. His former master, Nefius, offered him a position in the Triad Traders overseeing that transports out of Braburg and from Darin could ship non-taxed by agents of The Realm.

A task Kaosfrog did with great skill all the way up to and through The Great Invasion. As the 2nd Alliance won the reinstated former High King Black Oak pardoned Kaosfrog from any activities prior The Great Invasion due his tremendous contribution in the war. And thus began the Cleansing Crusade.

Kaosfrog is now one of the great Heroes roaming the isles for any foe or traitor he can peel or pull apart.