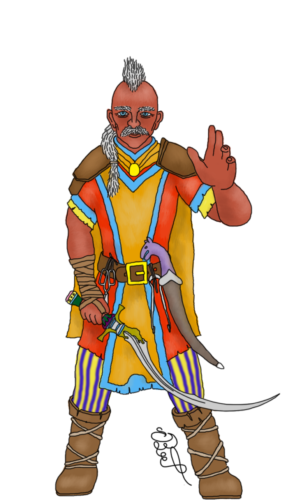 “The most skilled ever Human Craftsman.”

Born the 12th child of a Glassblower who specialized in time glasses. Cronos saw the light of lamps so to speak, as he was born at midnight sharp. Growing up in eastern Flurg, high uplands at the western side of Mt. Cobvi, one of the 5 highest mountains in Midgard. Very little threatened the towns population, and most there where specialized craftsmen and artisans, as people had been for hundreds of years.

So Cronos experienced a secured childhood, and with all the elder siblings taking up different crafts, he had plenty to learn from. When he came of age, around 1182, various masters of his siblings began to notice that he had passed their apprentices in skill. Despite the fact that he was sort of self taught, he seemingly just knew to connect the dots of things, and when but 16 he was in fact apprentice with 11 different masters.

When the century turned into year 1200 he was so skilled that people came from all over northern Midgard, Findon and Mealis came to share knowledge, and offer work contracts. Its said that people like Lionel, Setil, Atallanti, Dogil, and many more. Came by to get things produced, fixed or copied. But in 1212 he closed his workshop and left, leaving a huge gap in the demand of exceptional things.

F.F. Jaeger told me he met Cronos at MT. Vula and Wrekazi told me Cronos worked with her on the concept for the magic glass balls. He left in 1231 though, after the 1st was completed.

And in 1235 he gained a seat in the Guilders Counsel, most likely due his vast understanding of 12 different crafts. Yes 12, the 11 of his siblings and a thing of his own, which he had named himself as a Penduller. Guess its about swinging from one end of things to the other, then back again, ever expanding the distance covered. As in things learned. But he never elaborated on it.

He left them again in 1240 and I think he went straight to serve in the Gyron Lords.

When High King Black Oak resigned, Cronos left the Gyron Lords and traveled to Halkistal. As anticipated he met Black Oak and Krokus there, having many a long late hour talk. Deepminded told me she gained the impression, that Cronos and Krokus had met several times before. And him being a warrior from Ye Olde Zaphirs now that he left The Shore Ravens. She wouldn’t be surprised if it dated back to the times when the 1st Alliance was scheming.

Cronos stayed there for the summer, then left. And was not seen again until Battle of Weeping Plains.

I think he is still affiliated with the Gyron Lords if they exist as an Organization anymore.

Hes one of the most skilled Appraisers alive.