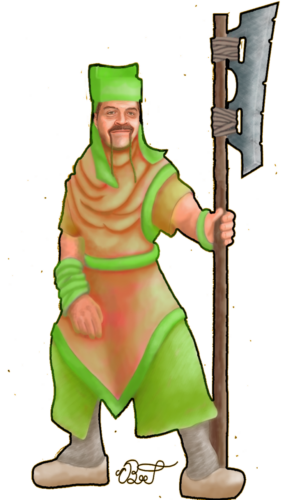 “The Axe-Dancing Tailor boy, who also use needle and thread for deadly dance. Had at the Battle of Weeping Plains his most grand dance ever.”

Born the eldest son of the court Tailor in the Naldar Clan of Quasaki. Jocky grew up with a splendid view from the upper part of their castle, set high atop the northern side of the Friona Falls. He did though find needle & thread boring, but honest to family traditions, he did become their familys 26th Tailor.

However he also loved watching the soldiers and noble ones practice, and as he grew he began to study the martial arts as well. And, he told me, it was a mere coincidence he developed his ‘Thread & Needle’ combat style. He was sewing a robe for the prince, when a fly kept annoying him. Finally, he darted his needle at it and yanked it back with the thread. 4th flip of hand and the fly was impaled. He spent the next 3 years practicing, formalizing, refining and Crafting the right thread and needles.

In 1179 their prince held a grand feast as he became 25, and Jocky asked if he could perform ‘A Tailors Dance’ to honour his prince. Curious of what a young tailor possibly could show, he was granted the request. I’be been told that at first some of the nobles jestingly mocked, as Naldar does best. But as the dance unfolded and Jocky speared lumps of bread, chicken legs, swinging them to his princes plate -to yank the needles out for a drop. Jests and grins turned into clapping and cheering.

The martial arts elders where impressed, the noblemen stunned and his parents proud. At the age of 13 Jocky became the youngest royal bodyguard ever to have been at a Naldar court.

Jocky spent the next 25 years protecting his prince, then king. But when his master grasped for supreme ruler-ship over all of Naldar in 1204, several other Clans attacked and razed their castle. Jocky managed to escape to Lioni, where he spent some years sewing for Lionel, but got bored of seeing his work disappear in the coffers of the Kinoblin Junks. So, in 1209 when the Ye Olde Zaphirs Smidhr Lord Nam visited island of Piecao Jocky became friends with him and got intrigued about their Horde. Leaving the other Naldar behind, he promished to come back when their time was right and left with Lord Nam.

There he somewhat turned away form his ‘Tailor Dancing’, as several of the monsters and foes he began to encounter, needed not a small numbing sting. But a single hard limb cutting or body splitting blow. So Lord Nam made him a special halberd, and began to practice, lets call it ‘Axe-dancing’ instead.

In 1210 he passed their warrior test and within a few years he was a full fledged Jarl with his own household between the temple of Kanziganthir and the cliff-mansion of Tuuna. There he spent the next 40 years honing his ‘Axe Dance’ with Myth, Baldur and several other great warriors.

In 1250 he became the Hordes Stallari as the former one, The Pilgrim traveled to Grimsborg to become Enforcer of the High King.

Jocky Chan held this title until 1263 where he resigned and left for Gaslug where he heard some of his former friends had created the settlement of Berserk Masters studying nature and how to ‘Dance with Spirits’.

Its said Jocky was at Naldar Island taking care of some personal and Clan business, when The Great Invasion hit the Island. Taking quite a lot of Kinoblin and Pigryn heads, as if his ‘Axe Dance’ was tailor made to cleave their skulls.

He entered the fray at Battle of Weeping Plains and performed outstandingly. Since the Cleansing Crusade he has traveled the roads of every Island with a childs chart, seemingly looking for someone.

He can go into some sort of perceptive trance when fighting, allowing him to sense all nearby enemies.