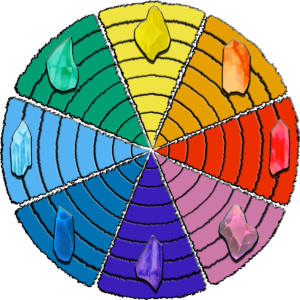 “Reality consists of physical things spun of Mana threads from the Astral, weaved into existence by Vornir determining everything’s fate, as well as Gods and powerful Mana Manipulators twisting things to their will.”

Long before the rise of Magic Schools, Academies, order and safety. There where individuals who found out to manipulate the Mana Sea and bend reality, to their own needs or ideas. Whether they learned it from Gods, other Races or figured it out by themselves, we don’t know. But, through time when they noticed each other, some fought to death meanwhile others exchanged their knowledge and started to categorize their knowledge. Laying the foundation of the tree Magic Realms and all Magic Paths.

All three Magic Realms are manipulated in different ways and as the Mana Manipulators insight and skills grows, they seem to sink deeper into the Magic Realm and core Aura Colour. This shroud them in the Magic Realm and their Aura Colours wrap their mind and carcass, making it increasingly harder to learn Magic Paths at the other side of the Magic Wheel. Studying Magic Paths of either Magic Realm, means aligning with its Gods and this is reflected in the Aura Colour of the Mana Manipulator. Furthermore, there’s a difference in how fast one can interact and manipulate reality, and the more complex an attempt, the longer it takes and the more energy it consumes.

Magic is divided into the realms of Channelling, Mentalism and Essence and all three are divided into Magic Paths. All Paths are tied to a group of Gods, seemingly drawn to and aided by, Mana Manipulator even in Essence and Mentalism using their Aura Colours. Mana Manipulators are founded in one of the three different Magic Realms, each manipulated in different ways. Thus, their seperation and distinguished Magic Paths.

Some Mana Manipulators are of such odd power that they don’t draw energy from Channelling or Essence. They are able to create a flow of energies, rooted more in their mind, than in the Gods or Nature. This is Mentalism and origins either from Spirit (Cyan) or Body (Red), each spanning their range of Aura Colours.

Manipulating the Mana Sea, can be enhanced using ingredients but also by adding in excess Mana, in the form of Magic Shards. These appear when Mana Manipulators are sloppy, purposedly not Truenaming released energies, or from Mana leaks from the Astral. Theres 8 of these Magic Shards and two multicolored oddities:

One can’t learn the opposite of ones core unless skilled beyond mortal capacity. The Human currently covering most of the Magic Wheel, is Deepminded, spanning 7 out of 8 Magic Wheel Colours.

Being able to use magic is a dangerous thing, especially when showing off at the wrong place. I never forget that day at “The Prudent Mule”, in Pikleby, Ivory Vale. Where a card-playing group suddenly erupted in large discussion, ending with one of them jumping up, with a showoff of skills, deep into the arts of Channelling divine energies. He started to utter various Truenames at a skinny man opposite the table.

Yet, as he was foolish enough to use a long casting powerful Channelling. The recipient of the energies had no intention of feeling whatever unpleasantries his opponent was unleashing, so he jumped up and also revealed himself a Manipulator. Hand Weaving quite elaborately and with great certainty, meanwhile shoving ingredients towards the chanting fool. He was clearly a manipulator of the Essence, going for a quicker released stunning and situation ending effect.

Their actions startled the surrounding card players and guests at the nearby tables. Some panicked and started to flee or hide, save for me and a hooded drunkard, who merely stared wide eyed and mumbling to himself. It was quite funny, to see others panic and him freezing over.

Just as the Essence manipulator released his small stunning lightning bolt, the channelling fool realized the outcome and altered his cast. I noticed at the corner of the eye, that the mumbling drunkard was not frozen by fear. He tightened lips and narrowed his eyes, in a way to focused stare at the men in conflict. At the exact right moment, he blinked… and the Essence Manipulators hand twisted out of sync flinging all his ingredient pouches into the erupting Lightning Bolt, causing it to go out of control and grow into a pulsing ball of electricity and magma-flames sucking up the Channelers vaguely controlled energy.

Both shrieked as their bodies where touched by elements and divine energies. They bent, twisted and where ripped open as their contained Mana streamed out. Then, they exploded in a spray of coloured lights, blood, and guts… almost hitting my mug of ale!

The silence that came was deafening. Everyone held their breath and sat frozen or laid in prone fear. Except the hooded, not so drunk Mentalist, who took a long gulp of his mead and rose slowly as he eyed the room and me. I am to this day certain I saw a blink of power-recognition in his eyes and a slight smiling twist of lips as we shared the glimpse. I gave a nod of appreciation of a well-hidden cast. But, we never spoke of it again.