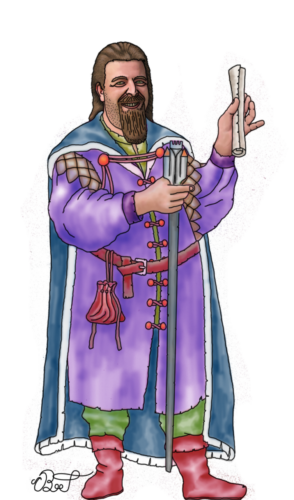 Mayor of Free City of Muldum

“His mind like a clockwerk… surely a most stunning clerk… all World trade gave a jerk… now counting berserk.”

Born in Greve at the southern shore of Lake Muldu in Skium. His father a Ogryl Engineer in the mines and mother an Markian Clerk accounting in city hall gave him an early insight into reading and writing.

At the age of 5 he went to a schooling program for clerks to be, and there he surpassed other kids. So, at the age of 11 he graduated 4 years prior the general student. After school he became involved in the standing army’s logistics, salaries and purchases. A title he soon saw opportunities in, and at the age of 17 he owned a trading company buying up small quantities of things around the country. Then to be sold in bulk to the army for quite a profit.

In 1207, after but 5 years in this double role, he sold the company to Nefius.

Some say that he gained such wealth, that he never again had to worry. But that he did, for wealth in itself is insecure and he began buying up property in the Free City of Muldum. A traders heaven laying between the northern shores of Lake Muldu and the open sea north of Markeoy.

He spent the next many years buying and expanding control over the city, and when the chance came he moved the masses by spending a vast amount of his wealth. Becoming mayor in 1220 he planned and carried out a breakout from the ‘king of Skium. In 1225, 5 years after his title was gained, the Free City of Muldum as such was an reality, and he now had but one thing to do. Secure it from invaders and the petty king of Skium, and the more dangerous 'King' of Markeoy.

So he assembled a large group of really skilled people and had them trained in melee and warfare by Mino the Minotaur. And in but 4 years they was ready, and was to announce the break-off in 1230 when Mino disappeared.

He used the mystery as the igniter and publicly announced the birth of the Bulls Order at a meting with the Counsel of Light and the King in july 1230, and such was their might, that agents of the petty King and Nefius who coveted all of Markeoy both did not send their armies nor Assassins. But instead opted to use diplomacy and trade so that all parties would prosper.

He took the city to great wealth and raised the living conditions for everyone. None know exactly where he was when The Great Invasion landed. But he was seen on the walls and barricades in the days that followed. And now, he as the rest of the Heroes wander The Realm purging foes and traitors.

One of the most skilled in Appraisial amongst all Races