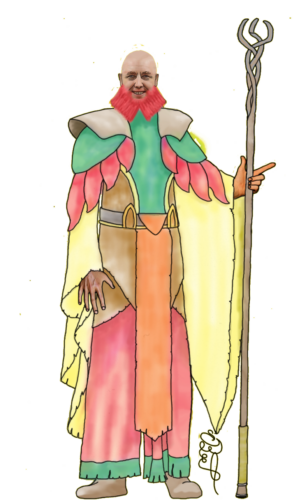 “At first the rebirth was a longed thing, now its a overdue curse to many of the ‘Reborn'”.

Born so long ago that it fades into the mists of time. Well, to be honest, I’m not sure if he’s ever actually been born, naturally that is. But its certain he’s been around for a while, and he’s one of the oldest Kings I know. Or, he has studied ancient lore hard and pretends. Just like that fella, Kanziganthir. Anyways, it’s said that when he was at the peak of his might the Gods arranged for a nearby mountain none expected to be a volcano, to erupt and eradicate his entire Horde and wipe their culture from this world.

This, some claim, infuriated him so much that the Gods allowed them all to be reborn and their entire culture was raised again by the Gods. A thing that’s said to have calmed them for a while, until they realized the trick them nasty Gods had played on them – to be reborn, over and over and… Oh, well I need some ale.

Born the eldest son of the Jomzaar king Ukkave he became King at only 12, when his father was slain by invaders. He quickly grew with the task of governing. It was but a few years, brutal and violent though they were, before all Tornix was united under his banner and peace laid itself as a heavy carpet in his kingdom. A carpet of trade and prosperity so thick that the people began to focus less on the divine powers and more on today’s trade and tomorrows crops. Zizu told me, right after I gained our 1st rank, that he used this as an argument against the Gods when petitioned for rebirth. It seemed to him that the gods, in an act of rash violence, destroyed his people simply because they where envious.

I’m telling this, because it was his own words and he’s one of the few I think could say such to their face, and survive it – if that’s the right word to use here.

After he became King of Dawn Reborn, a name they had for ages, due the dawn mists at sea somehow allows one to see the silhouette of the lost realm of Mt. Vula. Things went smooth and fast for the young clever Lord, and he soon brewed the idea to unite all Tornix under his banner. Despite knowing the price that had to be initially paid, he started their quest for this greater goal. Luckily his power and cunning was so great that it only took them 8 years before every lesser King, Jarl and chieftain was killed or subdued.

I’ve heard of a time before Holy Star Order gained a foothold in East Fjella. He one day strolled around the Capitals market down by their harbor. When he was approached by Den Godan telling him who he was and that he was sent by the High King Black Oak to advise that Holy Star Order was planning something regarding East Fjella. The High King suspected that they were up to some shady business that might break the peace. So Zizu should seek them out and over a meeting or dinner see what he could find out.

Thus did Zizu walk up to the group as they landed at his harbour, claiming he recognized them at a distance. But, the following meeting to which he invited Meanbone, who sadly couldn’t come, revealed little of their plot. But one can rest assured that Zizu had his eye and most likely agents on them ever after that encounter.

One of the funny things about The Dawn Reborn, is that they once fought a great battle against Ye Olde Zaphirs… All about a precious mineral mine at Mount Iridi at the shore border between Tornix and Usai…  A mighty fierce battle for the option to mine the extremely rare Iridium used in polishing the divine Shards into the Crown Gems…

One of the rarer major battles Ye Olde Zaphirs ever engaged in… and lost… some say it was due to the distance from their homeland making reinforcements arrive too late. Also the fact that every time a Dawn warrior was felled, the thing merely came aflame and stood reborn again… as if that cant take the stamina out of everyone and exhaust even the sturdiest of heroes…

After the Holy Star Order gained a foothold in East Fjella they of course focused on Usai and other areas that could secure their influence over The Realms valuables -like Mount Iridi]. Thus stirring the unity of the East Fjella] kingdoms, and tipping both balance and former friendships among the lesser chieftains and nobles. Striving to ruin that unity to gain power, was, I’m certain, the spark that ignited some of those that later became traitors to The Realm and supporters of the invaders. But there was nothing to be done about it, as Junnatu Weavers and some others had supported the Orders gaining foothold at extremely favorably terms.

When The Great Invasion came, Dawn Reborn was one of the main targets of Kinoblin, as they somehow were able to catch the re-birthing flames with their little Soul Lamps, thus cancelling the rebirth and imprisoning their souls. That’s why Zizu and his crew, as soon as the  2nd Alliance won at the Battle of Weeping Plains, went to the paths of The Realm to hunt for every single Kinoblin they could find, cursing the memory of every time they had seen one and not being able to free the trapped soul within it’s lamp.

If he die, his Spirit is reborn.