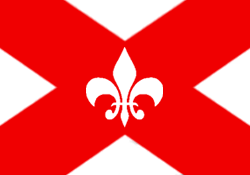 “Close to The Rim and its cold winter and Monster touches, and the previous sweeps of Naldar pirates, life was be hard and grim. With The Realm lifes became ligtht, but The Great Invasion turned everything back to The Rim grinning at people…” 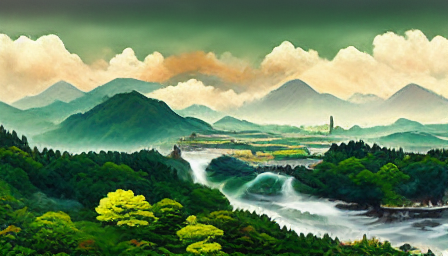 Originally the area known as Agion where a lot of warring Tribes fighting off winter, famine, monsters, robbers, pirates and invaders several times a year. Making the tribes suspicious of others and trade did not occur over long distances,. Caravans simply was too dangeroud to form, and parttake in. This way of life ensured that weak people did not last long, and as minds and hearts hardened so did the weapons, walls and tounges. One had but what one did, thus did upholding own, family and tribe honour a important part of life.

When The Crossing took place they where approached by the  Wanderers and many small skirmishes and wars erupted. But in time they began to coexist in peace, mostly because the Wanderers sided with individual tribes in the internal conflict they dragged along -seemingly from down South The Rim.  Securing a foothold at Dalip, the Wanderers spread to Fjella -before it split in halves. The random enforcing of some tribes, and the collections of thibes opposing the ‘traitors’ and WAnderers, made Agion into several strong fractions unable to break the stalemate.

A great battle between forces at Knocks Ridge formed a border stretching across the Isle from Folkes Bay to Pelerians Bay and the rough hilled lowlands once again split at Schnoors Ridge Southwards, cutting Marinet Mirror in half between two strong chieftains.

Another landsplitting battle where at Mopraars Marshlands, where a great force of tribes backed by Jomzaar was ahnilated by a native force of other Common, Ogryl, Archaic and Drakk Alfar who where fed up with the brutality and expanding. Valgimeer, a strong willed and genious commander managed to secure all lands Northof that and all the way up to Gilpoms Mirror, thus creating whats now known as Valley of Volgimeer.

And throughout Agon, many other chiftains, warlords, kings, and what else they called themselves. Held on to areas  for so long or so heroically that they now live eternally in local lore.

Around 575 SA some tribes began to distinguish themselves from the others and people began calling the tribes for Hordes as they swallowed up neighbours with ease. Amongst these Hordes further classification took place ove rthe next two centuries and around 800, some slided into the status as ‘lesser’ Hordes while a few rose to become ‘Major’ Hordes. These as such had great influence onto the evolution and merging of the various tribes into Agion.

When The Realm was born and the High King offered shared peace and further protection from those who preferred to steal and plunder. The various rulers of Agion elected their own King of Agion and swore allegience tho him. That King then swore allegiance to The High King, began construction of a new Capitol at the South-West shore of Gilpoms Mirrors and they became integral and equal partof the Realm. 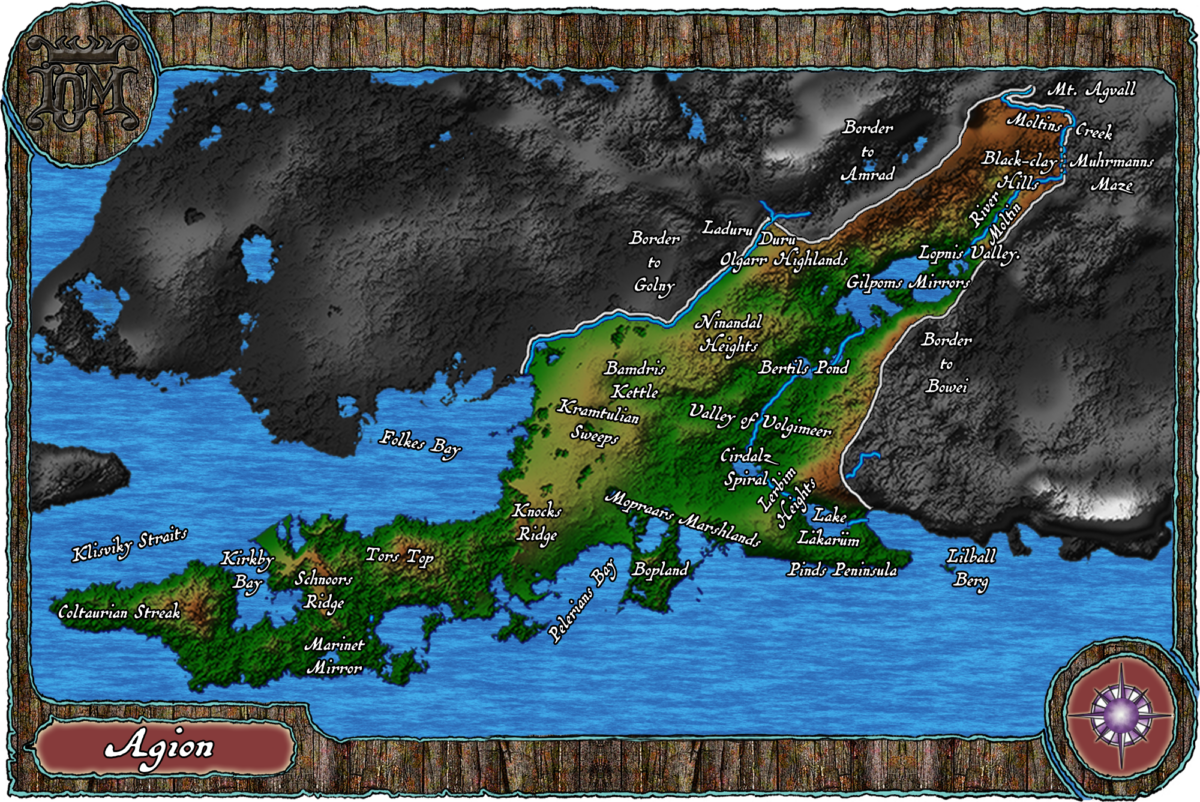 At Agions most northern end, in Mt. Agvall springs forth Moltins Creek and runs undecided down, not sure to go towards Bowei or Agion. But as it reaches Muhrmanns Maze it swings westwards and cuts itself into a deeper, stronger stream, River Moltin. Rushing down Black-clay Hills and pouring out into Lopnis Valley. There it feeds the gargantuan Gilpoms Mirror, at which it continues through Bertils Ponds into the Valley of Volgimeer. The valley ends at Cirdalz Spiral, an odd natural phenomen where the water runs in circles all the way down to what is estimated the sea level outside Agions southern shore. The river ends in Cirdalz Spiral, and it’s believed it feed Lake Läkarüm east of Lerbim Heights through underground tunnels.

At Olgaar Highlands the miners town of Duru harvest the strange Metal of Kirzi used to enhance Ljosti Bronze into Ljosti Gold. Then either sold and transported through Laduru in Golny or down to Olgaars Kettle or directly down to Olgarrs Pond.

The South-central part of Aigon is considered a great plateaustretching from the rather rough Ninandal Heights across Bamdris Kettle and Kramtulian Sweeps to Knocks Ridge where it sort of breaks harder off then it does towards Folkes Bay and the lands plunge down. in the South it ends with steep grasslands leading down to Pelerians Bay. Southeast of the plateau are Mopraars Marshlands an abrupt end of the heights and instead offer dense forests of wildlife and fish. Connected to the marshlands are Bopland a fountain of executive furs.

Far out from Pinds Peninsula lies Lilball Berg, mocking fishermen and greedy people from Dipokaland in Bowei with their Aigon preference.

Down South in the colder rougher part of Aigon theres the Coltaurian Streak known especially for the Tauri Tree which is appriciated throughtout The Realm and in the Outlands as we learned from Kinoblin trade. Most are transported to the shores and then the harbours, to be seailed across Klisviky Straits to Island of Piecao. Soe also pours into Kirkeby Bay where it, alongside with furs and Mineral from Schnoors Ridge, also is sold througout the World. Another ingredient that goes into Ljosti Silver, Oktamam, is mined at Tors Top.

Further South in Marinet Mirror and the streams leading to it Beige Trout are caught.

With the loss of their own elected King, the collapse of The Realm and even the downfall of the Major Hordes. They have been thrown back into the chaos at the dawn of time, now even spiced up by the pockets of Invaders and traitors still hiding and roaming. They do though hope, that aid and peach once again will come from Midgard

The people from Agion are rash and quick to the blade. The land is known for its dangerous wildlife and precious metals.