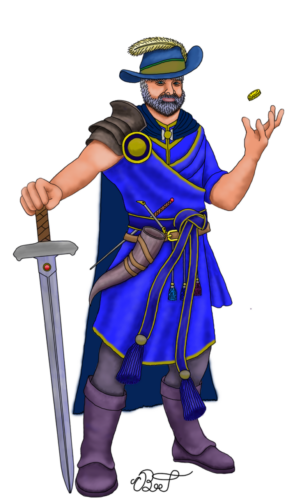 Godan of the Realm

“When waves crest many dread if a sighting is Den Godans ship, because it’s seen as more bad news than a Kraken.”

Born in Seviels with the name Deert Genyson in a small trader town, Bergia, at the shore of Butterfly Lakes and the foothills of Greystone Ridge to the north and Goutar Plains stretching south-west around the lake. The sole child of his merchant father and a mother a renoved Goldsmith he could spend childhood as he saw fit. So he played boys games, studied whatever lore he could get his hands at and socialized with everyone, even the shadiest of people he thought had something to offer regarding life and existence. As he grew he started to develop a policy of fairness in existence, and discarded those who wronged others. Over time a few friends became close companions sharing his thoughts and visions for a fair world. And they began ‘fixing the balance’ as they called it.

Within a few years their reputation of fair handlers of dues had grown, as had their skills of investigation, interrogation, melee and all those things. Some said that around his 17th birthday  they started to research magic and rituals. A path that would forever change their lives.

The life as a young lad always in focus birthed a mighty appearance which he carried with merry elegance. Always able to charm his parents customers, and silence his own, he had an easy way with people. That despite the fact that many people knew what he spent time with and what would occur if his gang felt they was wrongdoers. His politeneess overshined the dread of punishment. Maybe that was what some claim, also the source of his curse. For cursed they think him be, with that lover of his.

Let me tell what I know of that story; One day when their crew was visiting a fella, who had started to speak the dock workers cause. Not at all for their benefit, but to position himself and gain benefits due their labour -or strikes. He whistled and some of his rascals appeared and there they stood, gang versus gang, eye to eye. Then the fake unionists attacked the lads and a fierce fight broke out, one with cargo hooks, billoks, knives and more where wielded. Outpowered by the stronger adult trying to poke his eye with a cargo-hook, Deert saw no other solution than try that Magic he had only read sparsely about. So he uttered some words meanwhile trying to focus… and the head of the man exploded in a bright flash. Seeing that the rascals scattered! But another person, or should I say something turned up, changing his life forever! But enough for today, i’m hungry.

Around his 18th birthday they began to change, they became less active and it seemed as if they instead of settling dues started to focus on physical and mental training. They began to travel across Naldar and at rare times Deert could be seen strolling the streets with an extremely pretty female. There was something odd about her, exotic in a strange way and with a bearing far superior to what one would have thought of such a pretty lady. It was around that time they shifted from doing what they thought unjust to see things in a greater perspective. Dues to be force-paid by their crew had to be of importance to the island, not just a neighbour or a friend. So they started travelling far more than ever before.

It was in those years of heavy travelling that disaster struck Bergia and raiders plundered and killed. Deert’s parents amongst the slain, he was infuriated when he returned and he swore an otah to slay every wrongdoer no mater the cost. As his crew swore along him, its said that the female he had been seen with before apperead and offered them a solution -at  a price she would only reveal if they accepted the gift. Blinded by rage and trusting her due their long friendship, and maybe some affection, Deert accepted and so did his crew. She told them to enter her ship, following her onboard they did set sail and took off -but as the vessel was mid-harbor it sank -thus rewarding them with a drink of The Deep Blue.

Suddenly out of the cold dark waters in the harbour of Rankir, a mid sized trade town in Hokul, a ship emerged with a grim grinning crew at its prow. As it hit and splintered into the pier, the crew sprang ashore and rushed into town. The terrified city guards did nothing and within the hour the crew boarded again with a man as their prisoner. Then the ship went back into the dark cold waters and they where gone. People soon realized that 23 sailors lay dead in the streets, all from the ship that recently had come from the south with trade goods to barter. Something must have been amiss with that crew since they would end like this.

Later it became clear to all, that the goods were raid spoils from Bergia and that the crew had blood on their hands. But their captain was neither to be found in the city nor in the waters. People at the docks that day, said he was dragged along to the mystery ship, yet no one knows what became of him.

Had the people of Bergia not been struck with dread when the ship went under, they was for sure when it sailed into Bergia and Deert and his crew walked onto the pier with a prisoner. As they safely had left ship it sailed off with a smiling female looking at the crew and their prisoner. The townsfolk was uncertain what was going on and many was scared senseless, but seeing that captain who raided them a short wile ago they flocked. Deert proclaimed, “this man, cowardly as he is, are sentenced for his crimes by the Death Goddess Murf, me known from now of as ‘Den Godan’, and my crew known from now of as le Draugr Riders… -now, lets hang this culprit!”  And the crowd cheered.

After the hanging Den Godan and his crew moved south-East and settled at the other side of Mt. Kenekaiser in the rough hills at Kener Peninsula. There they built, some claim overnight, a castle they named Dueberg. It’s from this they since have operated as the Hands of Murf.

I’ve been told that in the late 1230’s he entered in the scheme to elevate Black Oak from king of Ye Olde Zaphirs to High King of all kings as they planned to unite all kingdoms into The Realm. And in 1239 Skjald Ulrich brought a young man named The Pilgrim along to one of their secret meetings. He wanted to present this agile youngster to the noblesmen and lords present and its rumoured that the lad won a duel with Den Godan. No wonder as The Pilgrim became one of the worlds most legendary meleers.

The rumours about others paying his hands are maybe fed by the fact that he was so heavily involved in the elevation of Black Oak and the institution of the High King. But I think it was because it served the ideology he formed as a lad, and not by the riches he later gained access to. But, he did serve his friends duely, like when he in 1249 travelled to Ashenhall to discuss a important issue of political stability in West Fjella with Zizu. and where he approached and explained things to the founders of Holy Star Order.

Sitting at a table… telling Gizmo & that holy lot… what & whatsnot…

In the years that followed the High Kings coronation things became far more fair in The Realm. And there became less to do for le Draugr Riders so they began studying magic even more than before. It’s said that they these days are amongst the foremost casters alive. A thing that benefitted them greatly when The Great Invasion hit. Those invaders based in magic they overcame by melee and those based in brute force they handled by magic. Being a Mentalist sure had its advantages. But so large was the numbers of Kinoblin that swarmed their castle, that Dueberg fell and was sacked.

But, those that dident  fall for the last time dispersed to the shadows and have skirmished their foes since.

Act as the hand of the death god.