“Once a myriad of Races lived in this area, but then it sank into The Deep Blue.” 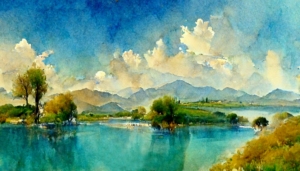 Once Southern parts of Markeoy were rich farmland, but when Ljostari sank huge floods flushed away much of the Southern lands and  most of the unshielded lower hills and roughlands. The huge Bay of Braburg and the Star Peninsula was created.

Since the high roughlands at Mumuarki survived the tsunami the huge amount of T'Aurs Tribes living in Braburg settled there, making it the largest known settlement of T’Aurs in The Realm.

At the Isle Mumuarki there live only T’Aurs and at the Star Peninsula there as good as only live Humans now. Aside from that several other Races lives at or close to the shores of the Bay.

All shores and waters are ruled by the King of Braburg, except the Eastern shores at the Star Peninsula. Those fall under the Holy Star Order.

Divers still can find items from Ljostari in the mud or diving, flushed up or freed after storms.