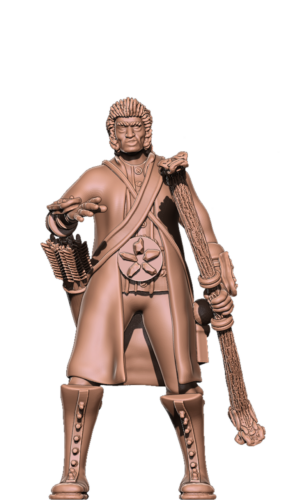 “No matter what wind and how hard it blows his face and work, he always scoff it and keeps returning to his climb towards power.”

Born in the town of Longyr at the wast side of  Vermufs Crevasse Bergon grew up watching caravans come from the Shimmering Valley in the east, Rin Roughlands in the south, and through Afmoll Valley all the way from the sea shores in Falbur.

He was the 6th child in a flock of 11 and as his brothers he exchanged child-play with mountain climbing to gather herbs, plants, and other goods from the mountains and rough foothills. This not only improved the lads physique and gathering skills, but also their scouting. Skills they began to offer to caravans and lone travelers to guide them safely through the wilderness. As skills and confidence grew, so did their prizes -and ideas.

In the winter of 1151, the annals of Longyr describes an incident, were a couple of traders was seen leaving eastward with Bergon and his brothers, but these traders never reached the town of Innil Imza in the Shimmering Valley. The loss of traders was blamed on the flock, despite they didn’t seem enriched by theft. Yet the Sheriff of Longyr needed scapegoats to ensure the towns reputation and his incoming taxes, so he blamed the family. The brothers was captured, sisters sold as slaves, and his parents banished from the town. Of the sons only Bergon managed to escape and from afar he saw his brothers hanged and sisters being shoved into a wagon bound for Falbur.

The next morning, as messengers came to town reporting the wagon had been ambushed, crew dead and all girls gone. People discovered that the Sherif sat at his desk with his throat cut and his mouth full of coins. No proof avaliable, but many thought Bergon to be the hand of task. And, that began a 15 year long period of ambush in as good as all of northern Udring.

In the 15 years that passed since that horrible day he saw his family destroyed, Bergon pursued those in power and the merchants he knew was behind the decision to send that signal. In the first years, many rascals and cutthroats, as well as corrupt officials and wealthy folks turned up dead -mouthfull of coins. So folk began talking, agreeing that maybe Bergons family had been without guilt, and he began to gain fame among the poor and mistreated. As years passed he gained quite a lot of followers and close comrades.

To my knowledge, he spend enough spoils to bribe enough officials to side with him, so that every spy and assassin sent -was sent back dead. After 15 years of odd guerilla warfare, he as good as controlled public administration and to some extent also the underworld.

State affairs learned and in a powerful position allowed him to enter negotiations, with the newly crowned King Leoandry II of Udring in 1166. The deal ended with him and his family getting a public excuse, and his gang -in fact a whole army, a public pardon. It’s said that as they signed, Bergon leaned close to Leoandry II who paled at the words whispered. In return Bergon became Minister of the country’s internal affairs.

Within the year caravan ambushes stopped and merchants once again began to flood valleys and crevasses with their goods. And it was a clever move by Bergon I think, to never reveal any of his fellow Borgians to the king and his allies. With a unknown amount of men in the shadows, Bergon could consider himself secure.

As the years went on little is known of Bergons actual doings as he stayed in the shadows of his ministry. But its certain that his powers spread from internal affairs to foreign affairs. Ambassadors and Consuls affiliated with Udring was often seen welcoming or addressing him whenever he did a rare state visit alongside the king or other ministers.

It’s said that in 1222 he tried to infiltrate Setil's Dark Needles and create a similar force. Maybe the biggest error in his life, as king Leoandry II in the spring of 1223 presented his son to the public, thought drowned many years prior. After their reunion the prince told his father that he had been a captive in some unknown dungeon since 1164.

Only by sheer luck had he managed to escape his captors a month earlier. He had though heard a name mentioned as captive -Bergon. He also had heard his captors jest, about how Bergon had fooled everyone, about the trader ambush in 1151 and managed to become even more powerful than the King. Infuriated King Leoandry II issued an arrest order of Bergon and to seize everything Bergon owned.

The allseeing eye an arrow caught…

Sinking but low not a lethal blow…

But once again shadows he entered…

Believed to be mighty a fist…

His new enemy stood there too…

So soon strings of his net sprang…

And hidden tongues in torture sang…

But even glow of prying eyes…

Wounded he fled and within a few years many of his known associates and thought allies in Udring was dismissed from power, some even executed as there where much wealth and powerful positions for grasps. And it might have been this, that as Setil told me, initiated Bergons visit at The Lair in 1230. A visit that took Setil by surprise. He had to recognize Bergons boldness and a truce was established, even though Setil was and still are uncertain if Bergon can be trusted. But at least Leoandry II stopped recieving hints from the Dark Needles.

This gave Bergon an opportunity to awaken his slumbering Borgians and a struggle began to get fully back into the intelligence networks of Midgard. A task that brought him news about The Realm and a High King. It made him travel the 9 islands as never before and it was on one of these travels, he told me, that he discovered the secret of king Meanbone of Junnatu Weavers. Knowledge he later shared with Lionel and the Holy Star Order.

After his revenge, climb to power, downfall, and truce he attemted to regain the reins of Midgard. And for that goal he kept the Borgians a shadow army and publically became leading member of Holy Star Order. Famous for his accurate long aim he led the ranks of their Rangers corps and due his background also the intelligence service, which he had a xast number of Borgians infiltrate.

At the time of The Great Invasion he was doing some research at the Astral and as he noticed a strange shift in energies. He turned to face the odd humming shimmer and was sucked out into a roaring battlefield. Seemingly through a temporary hole to the World that Dogil had created in the middle of nowhere -truly a stunning performace.

But there was no time to talk or study it, as hundreds if not thousands of grim abd odd foes was in chaotic infight with his order and a very large contingent of T'Aurs. He had an obligation as Order leader and vegan slaying foes…

Which he has done since.

He has a magic gem inserted in one eyesocket, enablimg him for extreme accuracy at long range arrow shooting and vealing abilities.