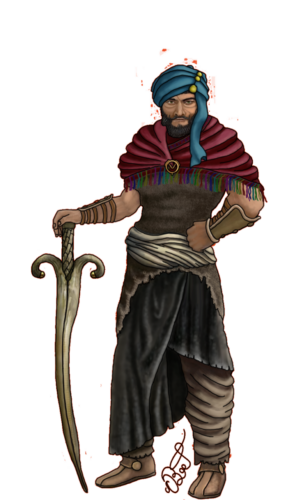 “Suddenly eyes opens in the shadowed corner of the hall, heard what’s needed unheard footslide’s occur. Either bringing them up to a target loosing treasure or life, or out and away.”

It’s sparse what is known about Setil, but he was born in northern Fril in the Barony of Djursala where Raqim Pass allow crossing the Jarvo Mountains into Fridor. The highlander rough-lands have a few settlements but at the entry to the pass lay the town of Crastor.

Crastor is mostly a trade caravan resting spot, but also have a thriving mining industry, unique apples called Crastallori and a large amount of sheep herders. All bringing values in the pockets of all townsmen, some of course more than others. Which I guess is what birthed the Grey Hands, Purse Pickers and more lesser thief guilds as well as the more lethal Dark Hand and similar assassination guilds.

Setil was born 4th child of a father who worked in the Crastor Crack, famed for its Silver and Irilium purity, and a mother who dyed the cloth of their neighbours wool. His elder siblings took their parents trades but he did not feel comfortable in the deep pits and found dying quite boring. So, when not playing he served the people in the trade caravans. And soon realized that these was way lazier regarding labour and relied on whits to gain a coin and make up for paid services. There was far better coinage and spoils in aiding these, than dying tons of cloth or coughing in the dark. So, when there were no caravans, he searched rough land and mountains for valuable stones, gems, minerals and plants.

As he grew he began journeying along with caravans as guide, first merely up until the pass itself, then with them into Fridor. It was in such a trip he for the first time experienced an ambush. Luckily for him all the hillside crawling had made him strong and agile, and all the skirmishes with the thief’s guilds had made him quite perceptive, so he survived.

Attackers fought down, there was now a lack in guards as well as owners of goods. So, the remaining traders agreed that he as payment for quite some defending, should have some of the excess goods if he cared to travel with them across Fridor to the town of Tanders. There they planned to sell their goods and then head back to Trov again. He agreed, and in 1159 he celebrated his 20th birthday at a campfire in Tanders with a bunch of traders. The next 12 years he spent travelling from Tanders to Birnake in Trov, always dropping out when he came to Crastor. Both to visit his family, but also to talk with old comrades.

I suspect he had been into the shadow guilds even before he began traveling, but I’m certain it was during those years his net began to grow and their organization Dark Needles gained its form and ranks. And as he was lucky enough to be in Tanders in 1170, when the Kinoblin anchored up and traded. He managed to direct so much of the ‘Daggers’ goods to the visitors, that he gained tremendous wealth. With that wealth he could finally launch his grand plan, spreading his Dark Needles all over Midgard and the isles.

So as the Kinoblin left he and a few of his followers travelled the coast, up through Fridor. Then Flaum, Falbur, Flurg, Keshon and finally into Shoak. In those lands I know he bought houses, villas, mansions and farms for his guild, and kept leading them even though they stretched thinner as weeks passed. When they reached Bay of Belri, there was only him and one more left in the party. They spent some days at inns and asked around in the town of Quagmire. Then they bought a closed watermill uphill and then took a break in spreading their net. Tending the news, they received weekly or daily the Dark Needles ranks, influence, and contracts grew.

Around six months later they learned that the Baron out at the isle in the bay had just died childless. So, the Mufthan of Shoak was about to either sell it or appoint a Mufta to run it for him. I assume he got it cheap, the trade sum was never public, but Setil bought the island. Then they moved from the watermill and established their head quarter at Gleamig Isle, with harbours in all 8 directions, roads between all and a castle founded at the middle of the island.

1185 was a great year for Setil. In but 46 years he had managed to create a web of Dark Needles across Midgard. He had gained friends and allies among the most powerful, even amongst Kinoblin, Drakk Alfar and T'Aurs, his castle The Lair was completed and his wife had just birthed him a son. So, he invited a lot of friends and allies to a grand feast, that was destroyed by an assassination attempt. Setil went unharmed but the creature managed to slay his wife and child before it was killed.

When the Mammutan crashed out of the bushes and speared Setil with its tusks everyone not used to these types of things panicked. I think that mess was what delayed the slaying of the culprit so he managed to stomp the baby and squash the head of Setils wife Zanita. Within a few minutes though, Lionel, Dogil, Skrewball and more had killed the Culprit. When Setil recovered from the nasty wound he demanded to see the corpse of his family’s bane and it was dug up. He studied it and cursed it was dead as he wanted to find the one behind the attack.

Since then he began to shun public life and its said his Dark Needles had the task of searching for information about this alongside any other. Even though I do know of sightings of him in the years that followed, it was never public ones.

More than 60 years should pass before Setil again was recorded at a major feast, and that was at one celebrating Black Oak king of Ye Olde Zaphirs. And we all now know that he was one of the powers behind the ideas of a High King and The Realm.

After that coronation he became a more frequent figure seen at Grimsborg. Luckily, he was travelling between Grimsborg and The Lair when The Great Invasion struck, as both places was completely razed.

He now rides aside the returned High King Black Oak in the Cleansing Crusade. Both far too old for war on horseback, but seemingly determined to deliver freedom or pay the last sacrifice.