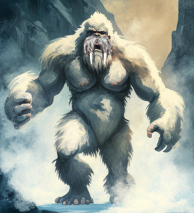 “First sighted hundreds of years ago, but left alone they did no harm. Then suddenly, from the icy cold cracks and caves of The Rim they swarmed after the Aquerian -destroying everyone and everything in their way.” 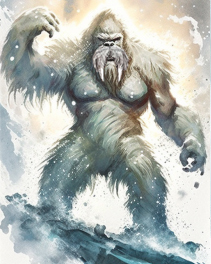 They are like a mix of Ape and Human with muscular bulging arms, their heads have two large tusks like Walrus, and long fur cover their entire body.

They have been sighted now and then at The Rim and in Darin for hundreds of years. But most often just one or two, keeping their distance, as they seemingly didn’t want any contact. Of what they lived and how has always been a mystery, but they seemingly just wandered about admiring the sky and landscapes.

Then, when the Aquarian crossed The Rim in The Great Invasion, they swarmed in hundreds at a time. Trailing the Aquarian in their own frenzied hunt, they killed every living soul encountered, thus we had to fight them too.

Studying the chronology of recorded incidents with these Half-Human, we can see they invaded the shores of West Fjella as the first recorded contact, seemingly in the direct path of the Aquerian. Thus we believe they hunt Aquarians to loot their eggs. But eventually they spread to Dalip, Naldar and East Fjella prior to landing in and roaming Midgard. So we are not enterily certain the Aquarian hunt was the sole reason for them coming. But, it made sense of the countless observations of Ye’Til scouting the sky.

When they swarmed down from The Rim, many carried rafts which they used for paddling across to the Southern Isles.. But, they where also quick to capture any ship or boat at hand. So, soon a regular swarm of them where advancing castles, cities and settlements alike across Dalip, the Fjellas, Markeoy and Midgard. Their thick fur served them as armour, protecting against arrows fired and blades slicing. So, when melee took place they took Humans by surprise as they ignored what would otherwise be crippling wounds.

They have not been recorded attacking further north than Naldar and the southern shores of Markeoy. It’s also reported that they disliked passing through or fighting in humid-hot swamps. So we assumed that their build, due them coming from the colder climate of The Rim, was a discomfort to heat. And thus they where fought with weapons, and Magic fire and steam.

Every castle cleansed, they are now forced out of The Realm and back to The Rim. Where they live in great settlements. 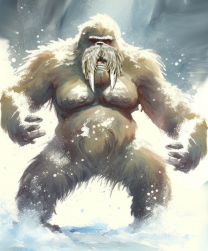 Each wave numbered hundreds when they attacked the gargantuan clan castles of Naldar and when victorious they settled in the vacant castles. Raising banners in different colours, it became clear to us that they seeminly have a organization similar to the Naldarian houses.

They prefer killing Aquerian above anything else.