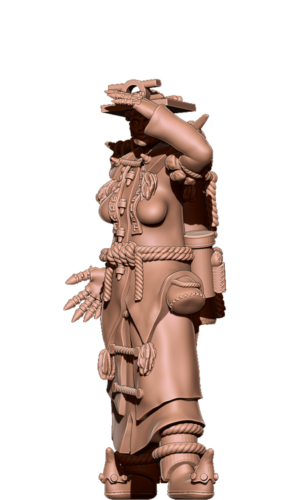 The bravest child… nothing too wild…

Not a romancer… but Aina Masterdancer…

First foreign and female… Aine Lord to be…

Born in the hamlet of Imvas at the east side of Mumra's Stomp, the largest known kettle hole in Butan. She was a hard deliverance, almost as she didn’t want to enter our realm. It took a full day from water broke till she cried out, alongside the blizzard howling outside. Her father a renowed Shaman and mother a seer of considerable skill, both were surprised she came without the foreseen cost of life. So, the joy was double that winter.

As she grew up close to wilderness, the other kids and her learned how to work together, to handle wildlife run-amok and beasts charging them. Finding ways to soothe Auras, calm minds, and confuse with odd war-dancing, meanwhile stabbing and slicing foes, became her mark. Sort of a hybrid between Shaman, Assassin and Warrior she found her a valueed part of a beast hunting group. Soon to keep not only their town, but the whole vale of Mistur Ofra clean of lesser beasts.

As the teams and her skills grew, their work were much appreciated. Yet one day, in the spring of 1175, when they attempted to find and best a rather unpleasant nuisance. They to late realized it was a full grown Mountain Troll they hunted. But, as they walked around a corner in a crevasse, the troll swung a large tree at them and crushed the chests of two of the young ‘Blood-tankers‘. Sprawling and moaning on the ground they died and only the ‘dodger’ had evaded. But as he landed on his knees and looked up, a huge rock was planted atop his head and splattered his brains out on the paralyzed supporters. The agile monster grabbed two of them and as it bit the head of their knife slicing talent. Nahita snapped out of the paralysis and she spun around and ran, realizing she was the sole survivor -and had to run to tell of this.

The vale saw several attempts to best that troll during the year. All fatal to the hunters successful enough to track it down. Then in the autumn of 1175 Wilson came to the town looking for Nahita. He wanted to celebrate his 40th birthday by severing that trolls head and have a laughter in its lair. Wilson told me, that he was surprised to find the girl, not scared and turning her back to the hunter’s life. But, working with a traveling Smidhr on a set of odd nailed combat gloves. She was eager to tell of the troll, on the condition that she could tag along and help kill it. Wilson was already then sharp and intuitive and from rumours alone he knew this one to be a talent. So, he agreed and she told him about their encounter.

2 weeks later Wilson stomped its head and Nahita took its fang and claws for use in her claws and armour. And, I assume from the hamlet and nearby village gossip, they did find the beasts lair and quite some loot.

She spent the winter with Wilson in Khemlet, a town down the Gullmann Roughlands and at the end of Pirkely Plateau. Being born and raised in small populated settlements, the time spent there was exiting. With caravans coming from west Butan through the Myrmi Pass, Snaw and Zilbur from east through Cavleths Canyon and uphill from the northern plains. It was a swarming nest of traders, rascals, adventurers, charlatans and noblemen. And they gained, I’ve been told, quite a good price for their loot.

In the spring of 1176, they travelled to Lake Progmorr in Quigly at the island of Utari. Wilson had heard some tales about a monster, maybe more, roaming the shores and killing livestock and travellers alike. Being a good team, they both went there and, in the autumn, it believed the last of the beast and monsters there was dead.

Nahita told me they went downstream and stayed for the rest of the year in Gir Dansk and was at the docks the day the Kinoblin landed. Seldom have she nor Wilson seen such skill as the one displayed by Polski that day. She told me last summer, that she actually never has asked Polski if he noticed Wilson and her, killing the 4 Borgians readying their poisoned darts and dripping blades. That, despite them having several talks with him during their winter stay at The Buckling Wyrm.

Come spring 1177 and she went to Karoly at the island of Naldar to study with the Aina Wardancers. If she could be accepted, it would help her monster killing a lot. Needless to say, their elders saw her potential and she was accepted. 14 years later she graduated and got her seal and the nick ‘Thunderclaw’. 8 more years and she could in the year 1199 call herself the first female and foreigner gaining the title of Aina Masterdancer. In 1211 she became 1 of the 3 Aine Lords and stayed there until 1219, when she received her old friend Wilson, a far more battle hardened Polski and a young skilled Channelling Healer called Sessy at their mighty Oaina Temple.
The 3 had heard of quite a monster guarding a Earthnode in Jabos and most likely, from the stories they had obtained, also quite a treasure. Grinning at Wilsons unsaturated lust for more spoils of danger and the option to slay another foul abomination she bade the people of the temple farewell and left. After all, The Hunt was her true call and the training here had only been to improve. And, it had begun to be more temple matters, organization quarrel and stylized rites than actual on the edge fighting. So, she was eager.

The beast wanted a feast… like with all the rest… it did its best… and it died….
No glory to tell… so swift it fell… in its golden cell…

1219 a year of traveling Midgard began with the slaying of a fearsome Blue Mewlip and continued onward from beast, to monster, to creature, etc. In 1220 they came to the Free City of Muldum and when they left Polski stayed behind. The others went to the city of Lilmarien in Osmes up at the northern side of Mealis.
There they had heard lived sort of a 60 some year old Alchemist famous for his potions and brews. Reaching the hot dry Domarii Desert north of the Phukaret Roughlands they regretted going there. Nahita told me she hated the heat and the dry salty air, as it made it hard for her to focus. An odd comment for a Magic user that far from The Rim. None the less they easily found their odd hermit, as Testiculas was quite famous among the lowborn and adventurers.

It’s said they dried out his entire stock of every potion, trinket, brew, powder and bag. And paid him such a number of gems and gold in return that he’s been spending generously ever since. But they didn’t stay for long, The Rim called as they heard a young explorer named Themac had discovered a huge apelike creature climbing the mountain paths south of Usai. Sounding like something they hadn’t encountered before they wanted to see this creature, and suddenly The Rim sounded interesting to them. What laid behind?

They did meet Themac in 1221, that he told me when we travelled together to The Grey Crevasse and they did believe in his sighting of what is now known to have been a Ye'til. But after spending 2 years trying to find it they gave up and came north again. Their accomplishes and determined hunt didn’t go unnoticed though and they were offered spots as Monster Hunters of the Oktogon. The free slots were due Coposim leaving for the Gyron Lords and a young talent being devoured by a sea monster. Both found the offer interesting and their first act was to undertake a one-and-a-half-year long hunt of the sea culminating in slaying the foul beast in the Bay of Wils.
They stayed with the Gyron Lords until 1240 where they parted with both the organization and each other. As they had different things they wanted to examine. Nahita went to Lake Komla in Ladris to study herbs and medicine with a small, but growing, mixed tribe of Moss'ari, Archaic and Ogryl living uphill at the east side.

In 1247 Nahita was again sighted amongst the civilized as she walked the streets of the Free City of Muldum, then in 1249 she was seen at the court in Ashenhall, and she was there in the shadows of the High King coronation. In 1255 she was seen in Ivory Vale and in 1257 she walked through the gates of Academy of Ea. She stayed at the academy until 1262 and was not seen again until The Great Invasion hit. Where she reportedly was fighting alongside Meanbone at the Junnatu Caves.

After The Great Invasion she went back to Butan where she waged guerrilla warfare to any Invader, traitor and monster that she could find. When she heard about the High Kings call for the last attempt to rid the invaders assembled in Midgard. She dared the Astral and came in time to join the Battle of Weeping Plains.
Now, she walks the paths and roads of The Realm, or should I say what’s left of it.

She can mesmerize all living beings and can’t be feared.